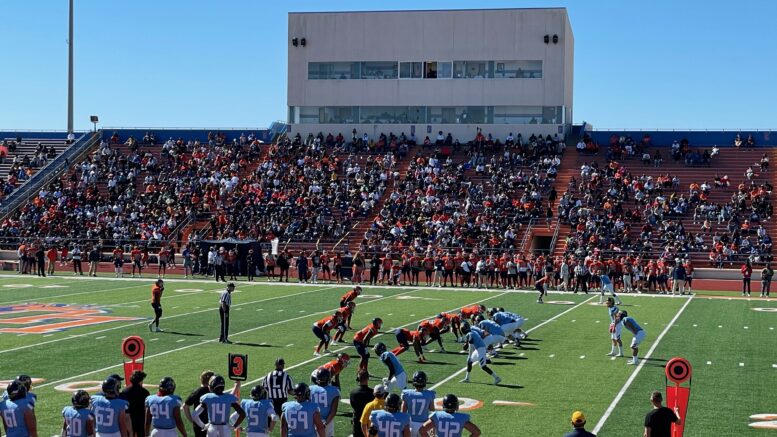 LANGSTON, Okla. – After an entertaining first half that saw each team take the lead twice, the Langston Lions finally seized control over the Texas Wesleyan Rams over the final 31:29 of game time to win their 16th consecutive Homecoming contest by a score of 42-31.

Trailing 17-7 after one quarter of play, Langston improved to 6-0 on the season after scoring 28 straight points, all from touchdown passes via junior quarterback Larry Harrington. He finished the game 12-for-19 passing with 312 yards and five total touchdowns. He also had 13 carries for 56 yards rushing in a day that saw Langston’s offense earn 505 total yards.

Langston got their largest lead of the game at 35-17 with 12:33 remaining in the contest, when Harrington found John Louis on a 76-yard dagger that effectively sealed Texas Wesleyan’s fate. The play, which could reasonably be compared to Auburn’s game-winning “Prayer at Jordan-Hare” against Georgia in 2013, was the second TD reception for the freshman wideout from Kenner, La. He finished with 110 yards receiving after catching a 34-yarder from Harrington in the second quarter.

The win effectively secured a de facto title game in the NAIA’s Sooner Athletic Conference, as Langston (#18 in NAIA) will travel to Surprise, Ariz. to take on the ninth-ranked Ottawa University Spirit. Both teams are the last undefeated squads in the SAC, and the victor will likely secure an NAIA playoff bid.

Ottawa leads the overall series 3-1, and is seeking a fourth straight win over the Lions after Langston won their initial meeting in 2018 by a score of 63-56 on Sept. 8 inside W.E. Anderson Stadium. The last meeting between the two teams was just over six months ago, when the Spirit won on Langston soil for the first time in a 28-24 triumph.

Langston will play Ottawa at 8:45 p.m. on Saturday, Oct. 23. A live radio broadcast of the game will be on KRMP 92.1 FM and 1140 AM in Oklahoma City. You can also download the STREAM by Perry Publishing and Broadcasting app if you aren’t in the metro area to hear the broadcast.

Michael Stewart is a former Sports Information Director at his Alma Mater of Langston University, graduating in 2009 with Bachelor of Arts in Broadcast Journalism. He also has served as S.I.D. at Tuskegee University in Alabama, and was the Sports Editor of the Guthrie News Leader from 2008 to 2010. Stewart is a 2004 graduate of Guthrie High School.