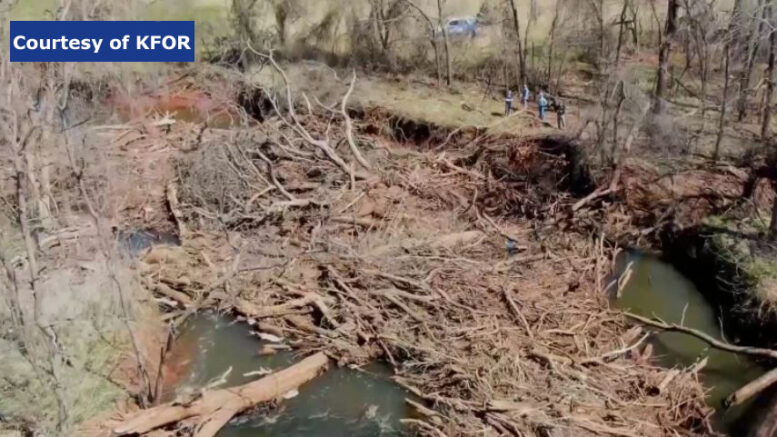 Updated on July 6, 2021 — An updated article has been published here on Guthrie News Page. A press release by the House of Represetnatives did not accurately describe where funding was made available to fix the logjam.

OKLAHOMA CITY—A creek along Waterloo Road has continued to widen with every heavy rain due to a logjam of trees and brush, flooding homeowners’ property and threatening road quality, but the issue may soon be resolved thanks to state funding secured by Rep. Garry Mize, R-Guthrie.

The issue remained unresolved for several years due to questions of legality. The logjam is located in Logan County, but the bridge is in Oklahoma County. Waterloo Road borders the two counties.

“Not only has this logjam caused some of my constituents to lose a portion of their property due to the expanding creek, but the flooding of the bridge with every rainfall raises serious concerns about the bridge’s long-term stability and safety,” Mize said.

KFOR took a look at the situation back in March. Oklahoma County Commissioner Kevin Calvey told the OKC news station he found a contractor who could provide a temporary fix for roughly $30,000 to $35,000. Calvey said Oklahoma County offered a resolution last year, agreeing to pay $25,000 to help resolve the issue. KFOR: ‘It’s a pain in the rear’ – county negotiations stall on massive Deer Creek logjam

“It’s not my county,” Calvey told KFOR. “The Logan County commissioners need to take action and pay a minority of the cost to take care of it.”

Logan County District 1 County Commissioner Marven Goodman was hesitant after reading the Oklahoma County resolution that stated (in part): Logan County shall incur the costs as necessary to complete the work/project in an amount not to exceed $50,000.

However, with the signing of House Bill 2900, state funding will be appropriated to resolve the issue. Mize, whose district includes Oklahoma and Logan counties, advocated for the funding after hearing about the issue from constituents.

“I’m relieved we were able to secure funding to address this issue for my constituents and avoid any long-term damage to the bridge,” Mize said. “Serving the people of my community is the whole reason I pursued public office, and I’m very glad to see funding appropriated for this purpose and look forward to seeing the logjam removed.”

“The massive Logan County Deer Creek logjam will now be fixed, thanks to Rep. Garry Mize, Rep. Nicole Miller, Sen. Chuck Hall, and Appropriations Chairmen Rep. Kevin Wallace and Sen. Roger Thompson,” Calvey said. “This logjam would have the potential to erode bridges and damage property in both Logan County and Oklahoma County, so these funds are very timely. I am grateful to our legislators for providing the funds to make this logjam removal happen.”

HB2900 appropriates $20 million to the County Improvements for Roads and Bridges Fund, a portion of which is expected to be used to remove the logjam on Deer Creek in Logan County. The bill goes into effect with the new fiscal year, which begins July 1.