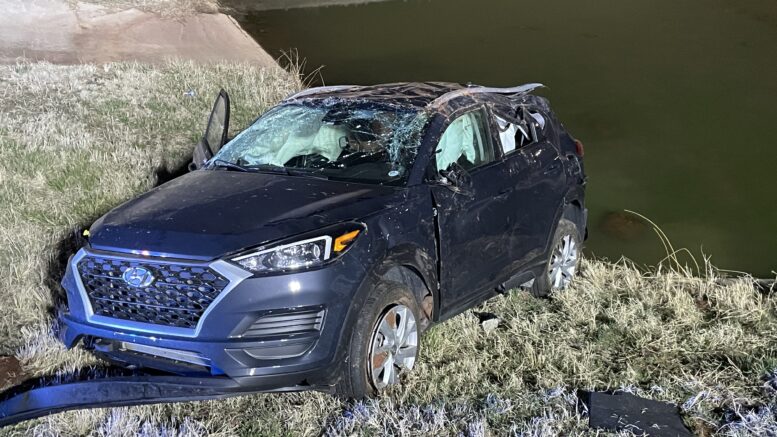 A two-vehicle crash on Interstate 35 had traffic backed up and stopped for several minutes on Friday evening. The crash left one injured, a Guthrie woman arrested, and a child turned over to family members.

Details are limited with no current report from the Oklahoma Highway Patrol, but the impact of the crash sent one vehicle into both guardrails before coming to a rest in the roadway. The other vehicle rolled at least once, sent down an embankment and nearly into a body of water.

The passenger in the rolled over vehicle was transported to OU Medical Center, while the driver refused treatment at the scene.

The other driver, identified as Caitlin Pollard, of Guthrie, was arrested for suspicion of driving under the influence. In the vehicle with Pollard was a juvenile. Both were not injured at the scene.

Pollard was booked into the Logan County Jail Saturday at 12:27 a.m., according to online records. On Monday, she was charged with child endangerment and driving under the influence.

All northbound traffic was completely shut down for 20 minutes as crews worked to clear the scene to allow motorists to travel on the shoulder of the highway until it was completely opened back up.

Be the first to comment on "Mother charged with child endangerment, DUI"