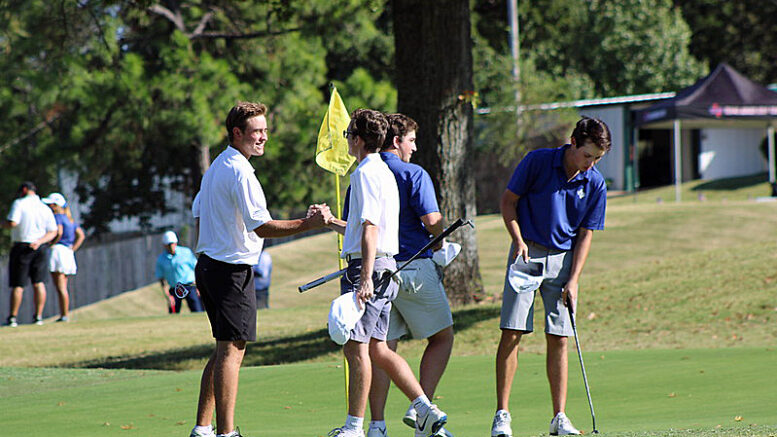 The annual Red River Shootout golf tournament was contested last weekend at Dornick Hills Country Club in Ardmore. The tournament pits the top 35 boys and 15 girls from Oklahoma and Texas against each other in a 36-hole stroke-play event.

While the Texas Junior Golf Team (TJGT) chooses their team by invitation, the Oklahoma Junior Golf Team (OJGT) uses a points-based system amassed during their summer tournament schedule. As the golfers are competing against one another for individual medalist, they are also grouped in four-player pods that compete against a four-player grouping from the other state.

The event is wildly popular among junior golfers in the region due to the quality of competition with the majority of the field ranked in the top-1000 in the world by Junior Golf Scoreboard along with Dornick Hills, designed by legendary architect Perry Maxwell.

Past participants in the Red River Shootout include several PGA and LPGA golfers, including Jordan Spieth & Patrick Reed.

Team Oklahoma rode a first-round wave of victories on the boys side to surge out to a 10-4 lead in the matches. Day-two was more closely contested, but in the end Team Oklahoma prevailed over Team Texas 18-10.

Guthrie senior and Air Force golf commit Bo Robbins opened with a 74 in round one and his pod defeated their counterparts from Texas. Day two, with Sunday pins and a stronger wind, Robbins closed with a 76 for a two-day total of 150 which was good for 13th of the 70 contestants in attendance.

Robbins’ four-man squad was victorious again over their Texas foes, claiming another point for the OJGT.

Individually, Tillie Claggett of The Woodlands, TX emerged from a four-way playoff as the girl’s medalist with a two-day total of 151.

On the boy’s side, the number three world-ranked junior and University of Oklahoma commit Andrew Goodman, of Norman, defended his title from a year ago with a two-round tally of 142.

Immediately following the event, Robbins indicated while he just missed his goal of a top-10 (by a single stroke) said he was “proud” of the way he battled Sunday while many talented players saw their scores balloon above 80.

Fellow senior Guthrie stand-out and Baylor-commit Luke Morgan participated in the event last season, but could only watch this year’s competition while recovering from injury.

Robbins and Morgan will official sign their National Letters of Commitment to play college golf on November 13 at GHS.

Pictured above is Bo Robbins (with hat in hand) shares a post-round handshake with partner Buddy Wehrli of Tulsa Victory Christian.