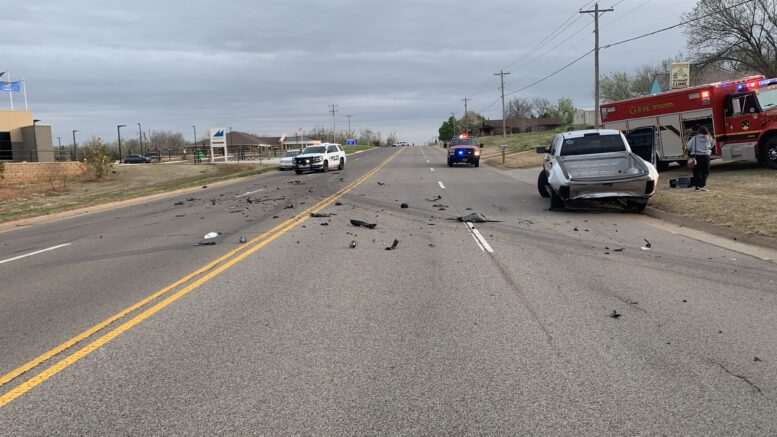 A teen was taken to an Oklahoma City hospital following a two-vehicle crash Monday morning.

The two-vehicle crash in the 3100 block of S. Division St. occurred just after 8 a.m.

According to a witness, a gray four-door truck and a purple Mustang were both driving southbound. The witness stated the truck attempted to turn into a business when it was smashed from behind by the Mustang.

The impact spun the truck into the outside lane of the northbound lanes. The Mustang – with air bag delployment – followed behind by jumping the curb, striking a gas meter and nearly hitting a City of Guthrie generator.

Guthrie Police were on scene investigating the crash but did not release immediate details.

The driver of the Mustang was transported to OU Medical Center with leg and head injuries.

The roadway was closed off to vehicle traffic in both directions for several minutes before being opened to one lane each. The road was reopened just after 9 a.m.

Be the first to comment on "Teen suffers injuries in vehicle crash on Division St."