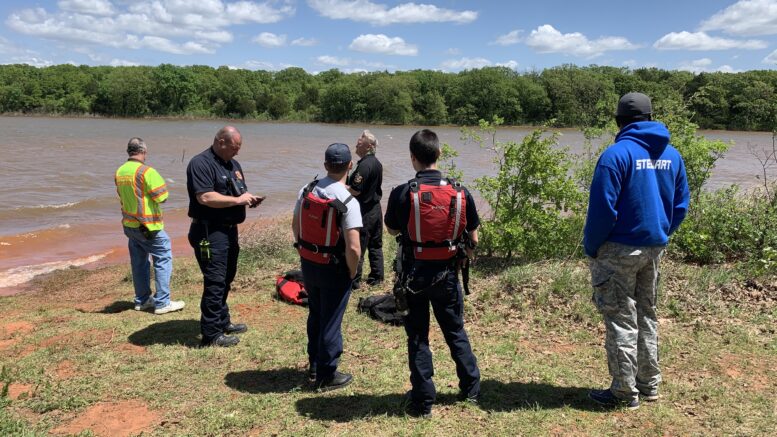 Updated on April 30, 2020 at 11:30 a.m. — The Oklahoma Highway Patrol dive team has recovered the body of a fisherman Thursday morning.

The body was found, by sonar, between the boat and the shore line. The boat was approximately 100 yards from the bank.

The dive team will now begin to recover the boat.

After almost seven hours of searching on land and water, a man remains missing following a boating accident on Langston Lake.

Police with Langston University and the Town of Langston, along with Guthrie and Coyle fire departments, were dispatched on Wednesday shortly after 12 p.m. to the south side of the lake.

A father and son were fishing in a 16-foot jon boat when the boat began to take on water. The two men began to start back to the dock due to the high winds (gusting over 30 mph). However, the boat tipped, approximately 100 yards from shore, sending both men into the water.

Neither men were wearing a life jacket at the time, but several jackets were in the boat. The younger male was able to grab one of those jackets and swam to shore.

The son says once he reached the shore line he was unable to locate his father. After going through a thick, wooded area, the son was able to flag down a vehicle and call 911.

The fire departments used water crafts to search for the man, but when the search came up empty the Oklahoma Highway Patrol’s dive team was called in to assist.

Despite sonar capabilities, the teams were unable to make a recovery as the son, who was later joined by friends and family, sat and watched the ongoing rescue from the bank.

Emergency personnel searched the wooded area in hopes of finding the 55-year-old man.

The recovery search was called off at 7:30 p.m.

The recovery teams are expected to return Thursday morning to continue the search.