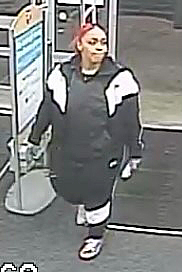 The Guthrie Police Department has been searching for a woman who they believe took off with $1,400 worth of merchandise from a retail store in Guthrie.

Police asked the public for their assistance in finding the woman in the case on Jan. 15.

According to Sgt. Anthony Gibbs, the woman was captured on Walgreens surveillance video on Jan. 12 with unpaid merchandise.

The woman was later identified as 26-year-old Aireal Michelle Simpkins.

Investigators, working with other jurisdictions, determined Simpkins was responsible for over an additional $3000 in similar thefts in central Oklahoma.

Oklahoma City police have also been searching for Simpkins and highlighted her on their social media pages after allegedly striking multiple locations in the metro area and stealing lottery tickets.

Simpkins was arrested in the Wellington, KS area and is awaiting extradition.