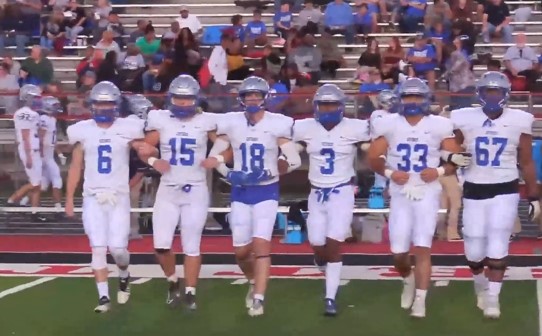 The Carl Albert Titans won their sixth straight game against Guthrie Friday night in a game that essentially was over by halftime in Midwest City.

The Titans scored 24 second-quarter points to finish with 31 at the half. In the second half, each team scored a touchdown as the Titans made it look easy with a 41-7 win inside Gary Rose Stadium.

“We got out coached, out played, and out physical,” head coach Kelly Beeby said after the game. “(Our) performance was subpar. Give Carl Albert a lot of credit. They’re a good ball club.”

Carl Albert senior quarterback Reed Dequasie, a 2021 transfer from Choctaw, scored the first three touchdowns with runs of 72, 9, and 8 yards to go with a 30-yard touchdown pass.

Dequasie was not shy when talking to reporters after the game by saying, “I expected a blowout, to be honest with you.”

Titans junior running back Xavier Robinson, who was recently offered a scholarship by Iowa State, showed why he’s among the top running backs in Class 5A.

Multiple times it appeared Robinson, a transfer from Mustang, was going to be tackled for a loss only to see him pop loose for big runs down the field, including a 71-yard touchdown run.

Guthrie’s lone score came early in the third quarter with a 9-play drive and a 13-yard touchdown run by junior Hayden Calvert.

With the loss, Guthrie has now dropped their last six games with the Titans dating back to 2016. In those games, Carl Albert has outscored the Jays 232-43.

The Jays will now look to defeat Lawton Ike on Senior Night this week and the regular season finale next week in Shawnee to finish as high as third in the district.