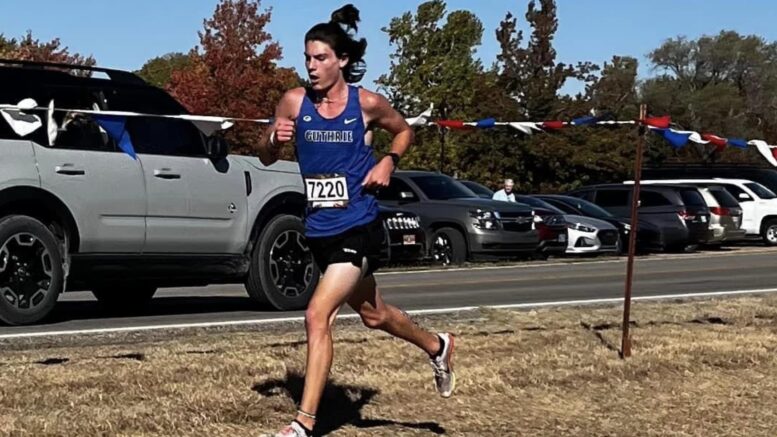 Mason Mayer runs at the Ponca City Lake Disc Golf Course. The junior won the regional title by crossing the line first in the 5A race.

The Guthrie High School cross country teams are headed back to the State Championship Meet following their performances at the regional championships on Saturday.

Despite health and illnesses, both teams managed to have good races. The Bluejays finished second overall, while the Lady Jays sneaked into fifth place.

The Lady Jays were without two of their top runners.

“Girls ran without the No. 1 and the No. 2 was noticeably sick. The girls were a little nervous but handled it well overall. They just had to do their jobs, and they did that very well,” Balenseifen said.

Mason Mayer headlined the day for the Jays by coming across the finish line first for a regional championship. The junior ran the Ponca City Lake Disc Golf Course in 16:53.57 and was nine seconds faster than the next runner (Dathan Custar) from Woodward.

Freshmen Kallon Cyphers was pivotal for the Jays second-place finish despite the team being without two of their key runners.

“(Cyphers) stepped up big time, which was what helped seal the runner-up finish,” Balenseifen said.

For the Lady Jays and their fifth-place finish, they were without top runner Kamryn Boller who is hopeful to return for this week’s state-run.

Leading the regional charge for Guthrie were junior Hannah Smith and sophomore Peyton Read. Only 13 seconds separated the two for fifth and sixth-place finishes respectively.

Just outside the top 10 was wrestling (state qualifier) phenom junior Klaribel Kirk with a time of 21:54.

“Both boys and girls raced against the No. 2 ranked teams in 5A, and both looked very beatable.

The kids are tired, but they’re still focused. If they get healthy over the next few days, and they control what they can control, then next Saturday could be a very interesting day for both teams,” Balenseifen said.

The State Meet is set for Saturday morning at Edmond Santa Fe. Class 5A girls are scheduled to begin at 10:15 a.m. and the 5A boys are to follow at 11 a.m.

Be the first to comment on "CC teams headed back to State; Mason Mayer regional champ"