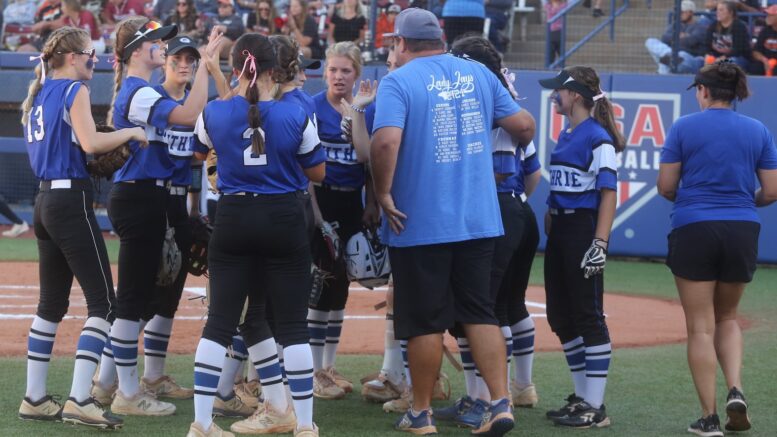 Head Coach Booker Blakley talks to his team during the Class 5A State Tournament at Hall of Fame Stadium in Oklahoma City. Photo courtesy of the Guthrie Lady Jays Booster Club.

The further a team advances in post-season the more it hurts when it comes to an end. The Guthrie Lady Jays felt that emotion on Thursday at Hall of Fame Stadium.

Coweta scored twice in their final at bat to squeeze past Guthrie, 3-2, in the first-round game of the Class 5A state tournament in Oklahoma City.

Guthrie freshmen pitcher Kinley Duehning had the defending 2020 state champions on the ropes for the entire game.

The Lady Jays scored the game’s first run with a two-out solo blast from freshmen sensation Haley Gallo. The no-doubter sailed over the left-field wall in the third inning. The homer marks Gallo’s 15th on the season.

Coweta tied the game at 1-all in the bottom of the fourth with a RBI double.

Guthrie took their second and final lead in the fifth inning when freshmen Ava Hebensperger, who singled to begin the frame, scored on a Tiger’s error.

Coweta put together two hits in their final at bat to walk off the Lady Jays.

Guthrie ends their season with a 23-10 record.

On Friday, Coweta rallied to beat Durant 10-5 and will play Piedmont for the 5A title on Saturday.