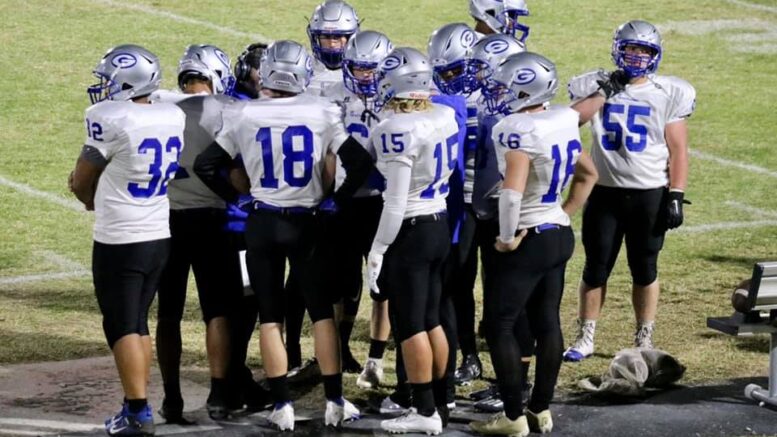 The Guthrie Bluejays scored early and often in their Class 5A District 2 game with Guymon in a 62-12 win.

The Jays scored three times in the first quarter and three more times in the second quarter to secure their second straight win and their sixth this season.

Guthrie (6-1) improved to a 3-1 district record and remains tied for second place as they get set to host Lawton Eisenhower next week.

Junior Tyrin Eaton got Guthrie on the board first with a 53-yard score off a screen throw from sophomore quarterback Hayden Calvert.

Only 25 seconds later, Guthrie was back in the end zone. This time with a scoop and score from sophomore Niko Pena, who scored from four yards out.

Junior running back Isaiah Hammons, who was able to rest the entire second half, scored with 1:52 left in the first quarter on an 8-yard run to give the Jays a 21-0 advantage.

Hammons scored the second time on a 15-yard run to increase the lead, 28-0. Less than 90 seconds later, senior running back William Morgan scampered in from 9-yards out.

The final score before half came on the legs of junior wide-receiver Jaylen Chelf with a 5-yard run to send the Jays into the locker room leading 41-0.

Just like the first half, Guthrie scored quick in the second half after Eaton scored on a 57-yard kickoff return just 16 seconds into the third quarter.

Sophomore wide-receiver Jaylen Harper received a perfect pass from Calvert in stride for 67-yard third quarter score. The final touchdown came from senior running back Jacob Varnell, who score in the fourth quarter on a 3-yard run.

Eaton was named the NORTHCHURCH GUTHRIE Player of the Game with his two scores to go along with his 104 receiving yards.