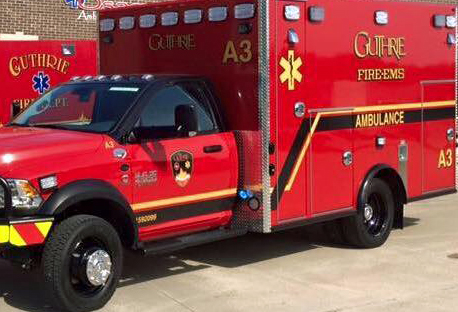 Update 8:30 a.m. — The report of a gas leak at a Langton apartment proved not to be true, according to a statement by Langston University.

In part, a release from Langston University’s Public Relations stated, “The University was made aware of a potential gas leak at Building 10 in Scholars’ Inn apartments. Authrorities were called immedately, including EMS and the local fire department. Following a thorough inspection by Oklahoma Natural Gas, it was verified that this was a false report and no gas leak was detected in the area.”

Out of caution, the building was evacuated.

Guthrie News Page has learned at least seven people were transported by ambulance.

The cause of the illness remains under investigation.

12:18 a.m — All patients have been transported from the scene to area hospitals.

Just before 11:30 p.m., law enforcement officers and medical officials responded to Scholars Inn for multiple victims who were found unconscious.

The victims (8 to 9 people) were found being dragged out of the apartment complex by other citizens.

Guthrie EMS was dispatched for three ambulances, Miller EMS with two and LifeNet for two.

Law enforcement believes a gas leak may to be blame for the injuries, but remains under investigation.