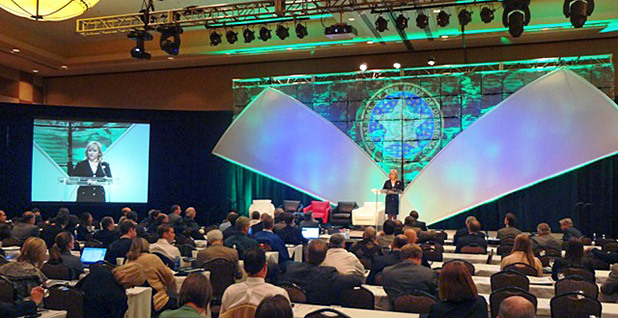 OKLAHOMA CITY — As she knocked on the federal government’s door for aid in the wake of a damaging earthquake in 2011, Oklahoma Gov. Mary Fallin (R) avoided talking about one aspect of the earthquake — its cause.

Too “awkward,” said Fallin’s communications director, Alex Weintz. “The problem is, some people are trying to blame hydraulic fracturing #a necessary process for extracting natural gas# for causing earthquakes,” Weintz wrote in an email, vetoing mention of the earthquake at an energy conference. “So you see the awkward position that puts us in. I would rather not have to have that debate.”

That was two days after the magnitude-5.7 rupture toppled chimneys and injured two people east of Oklahoma City. Since then, the earthquake issue has only gotten more awkward for Fallin.

Oil and gas has been her biggest financial backer, and it’s the most prominent industry in the state. But scientists say oil and gas activities have caused hundreds of earthquakes, rattling her constituents and their homes.

It’s not hydraulic fracturing, or fracking, that’s causing the quakes they’re feeling. Instead, scientists say, it is wastewater disposal. Fracking and other production activities create millions of gallons of wastewater that get injected into deep underground wells. In certain instances, the fluid can seep into faults, lubricate them and unleash quakes.

EnergyWire reviewed thousands of pages of emails and other documents provided by Fallin’s office under the Oklahoma Open Records Act. They show a team in the governor’s office that moved slowly to address the quakes even as the earth rumbled more and more frequently.

Be the first to comment on "EARTHQUAKES: In oil-friendly Okla., Gov. Fallin moved slowly on ‘awkward’ issue of quakes |www.eenews.net"