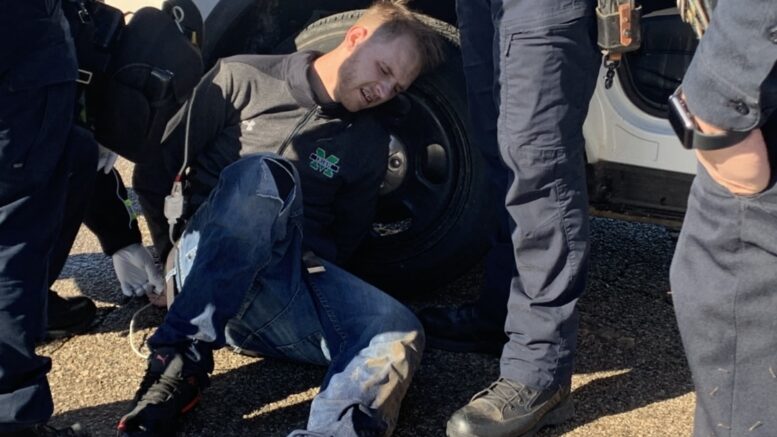 A man is in police custody after leading an officer on a short vehicle pursuit and a lengthy foot pursuit on Friday afternoon.

Just after 3:30 p.m. a Guthrie police officer attempted to pull over a red, four-door vehicle near the intersection of Pine St. and Noble Ave., but the driver continued driving and eventually drove behind a residence in the 200 block of N. Pine St.

A brief time later, the driver crashed out by striking trees and took off on foot through a thick, wooded area.

As the officer attempted to chase the suspect down, the man reportedly told the officer to “shoot him.”

The suspect’s foot trail – in the snow – took him into an empty house in the 1600 block of E. Oklahoma Ave.

With a perimeter setup, four officers made their way into the house, where they found the man hiding in a basement. He was taken into custody without any further incident and was led to a police cruiser.

The man claimed several medical issues. Guthrie EMS was called to the scene, where he was treated and released.

Following a search of the vehicle, drug paraphernalia was found.

The suspect was arrested on several complaints, and is expected to be formally charged next week in district court.