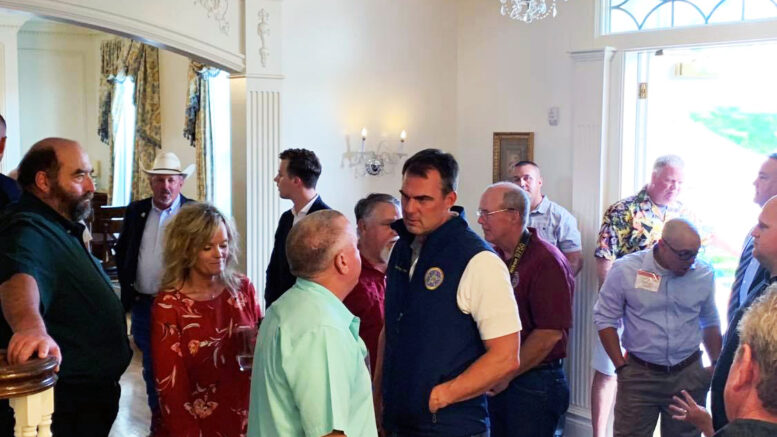 Guthrie hosted the 127th event this past week.

Stitt appeared at the Dominion House on Friday night prior to the banquet dinner as he shook hands, took photos and spoke with guests.

Guthrie Fire Chief Eric Harlow, who has served as President of the OSFA this past year, introduced the governor to the assembled group. Harlow mentioned Stitt has been to each of the OSFA conventions since he announced his candidacy for governor.

“It feels great to be back in Guthrie,” Stitt said.

Stitt spoke briefly on a portion of the bills that was passed this legislative session.

Guthrie proves to be a great host city

It has been a busy few weeks for Harlow and the Guthrie Fire Department as they hosted several hundred active and retired firefighters from across the state. The locals were rewarded with numerous compliments as Guthrie was on showcase.

Events throughout the week, included a golf tournament at Cimarron National Golf Club, Shotgun Shooting competition at Silverleaf Shotgun Sports, a fire apparatus parade in downtown, a picnic at Mineral Wells Park and a pub crawl with three local bars.

The Dominion House was used throughout the week for convention meetings, a memorial service, vendors and banquet dinner.

“This place is amazing,” Stitt said as he entered the Dominion House for the first time.

The Oklahoma State Firefighters Association offers a wide array of benefits and resources to assist the Firefighters of the State of Oklahoma. For more about the OSFA, including the firefighter museum, visit their website.

Be the first to comment on "Gov. Stitt visits Guthrie for OSFA Convention"