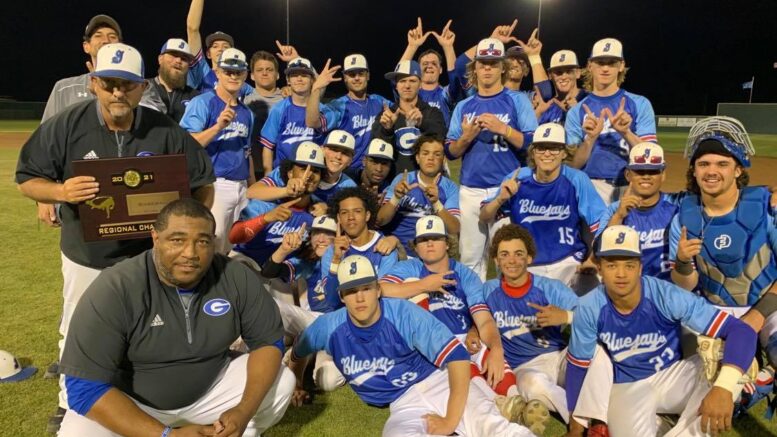 While this year’s high school baseball state tournaments are not being played in Tulsa this season, the Guthrie Bluejays are indeed living on Tulsa Time.

Don Williams 1982 Tulsa Time has been played throughout the years for the baseball program after winning regional championships.

The Jays secured their berth in this year’s state tournament by going 3-0 at the Lawton MacArthur regional. Despite entering the regional on a three game losing skid, Guthrie piled up wins over Del City (4-2) and twice over Lawton Mac (9-8, 10-7) to punch their ticket.

The state tournament berth is the first for the program since 2013.

Guthrie (20-11-1) will play Pryor in the first round at Edmond Santa Fe on Thursday with a first pitch scheduled at 4 p.m. Pryor defeated Shawnee twice in a home regional to qualify and enters with a 30-8 record.

District 5A-2 proves once again to be stellar with Guthrie, Carl Albert and Piedmont making up three of the eight teams in the state tournament field.

The quarterfinal and semifinal games will be played on Thursday and Friday at Edmond Santa Fe High School.

The championship game is set for Saturday at 3 p.m. inside David Allen Ballpark in Enid.

The Jays held Del City to only two hits, while picking up eight hits of their own.

Pitching Coach Terry Bennett put the first game trust in freshmen pitchers Luke Hubbard and Hayden Calvert. Despite the combined eight walks, the young hurlers allowed only one hit each.

The game was tied at three with Guthrie batting in the top of the fifth when Carson Wilder singled to bring home two runs.

Guthrie built a six run lead in the seventh inning to lead 9-3. However, MacArthur did not go away quietly by scoring five runs in their final at bat.

Josh Rains picked up the win on the mound and collected nine strikeouts in five innings of work. Luke Hubbard finished the final two innings on the bump.

The Bluejays scored in five of their six innings, including three instrumental runs in the sixth inning in a tied 7-7 game. Mac pitching did not allow one hit in the inning, but gave up four walks and two hit by pitch.

Wilder, Payton Miller and Jackson Walters each collected two hits in the contest.

One of Miller’s hits was a towering 3-run homerun in the third inning to give Guthrie a 6-3 lead.

Miller pitched the first four innings and gave way Zach Henry for the final three innings. Henry did not allow a hit or a run to pick up the win.