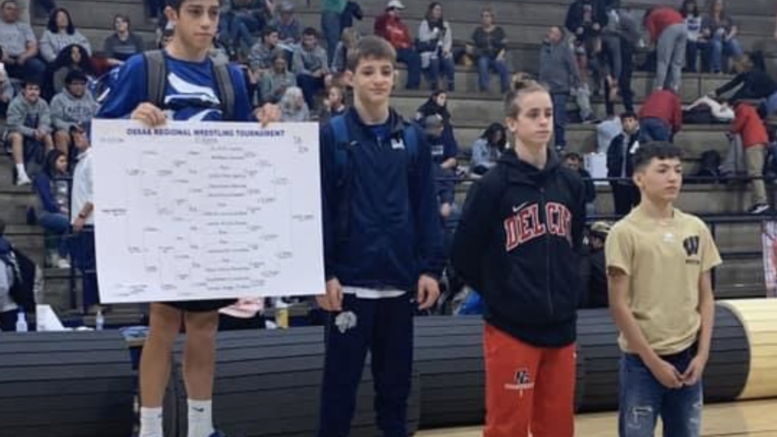 The Guthrie Bluejays will be represented with five student-athletes at this week’s State Wrestling Championships in Oklahoma City.

The Jays headliner of the regional was freshmen 106 pounder Eli Kirk, who capture the regional championship over El Reno’s Conner Knapp.

With the win, Kirk improved to 23-7 on the season.

Kirk awaits his first-round opponent. He will take on either an opponent from Glenpool or Duncan.

The only freshman qualifying for the 120-pound state bracket is Guthrie’s Braden Hall.

The frosh took third in El Reno to improve to 28-13 overall. Hall will face Glenpool’s Mike Edwards, who enters the match with a 32-9 record.

At 138 pounds, Dean Madison improved to 27-9 on the season as he brought home a second place in regionals. Madison dropped the regional championship to Duncan’s Blayton Montgomery.

Madison, a junior, will challenge Pryor’s Kolby Encinas, who comes into the state tourney with a 28-11 overall record.

At 195 pounds, freshmen Coal Madison finished second in regionals. The freshmen could not overcome the senior from Piedmont, Austin Cooley, in the finals.

With a fifth place regional finish, Sam Wilhelm will wrestle under the bright lights in attempt to challenge top-seed Talon Phillip from Lawton MacArthur.

The state championships are set for Friday and Saturday.

Doors at the State Fairgrounds Arena will open at 8:30 a.m. for the Friday morning session. The wrestle-in matches begin at 9:30 a.m. with first round matches set to go at 11 a.m.