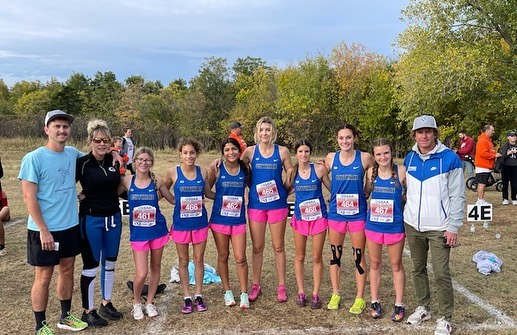 First-year head coach Bryce Balenseifen saw multiple hurdles throughout the 2022 cross-country season with injuries and illnesses to both of his teams. Both of those followed the Jays to the final race of the season.

The Lady Jays finished third overall and the boys 9th at the Class 5A State Meet Saturday morning at Edmond Santa Fe.

“We’re all excited for the girls, but equally bummed for the boys,” Balenseifen said. “The girls were fantastic. Fortunately, they were mostly injury-free, and they recovered from the sickness that plagued them at regionals.”

Junior Kamryn Boller missed out on the regional run due to an illness but returned to finish as an All-State runner by finishing seventh overall in a time of 19:44.

“Six of the seven girls ran their best time ever. Not much else to say – they were simply fantastic.”

Guthrie finished with 87 team points behind Piedmont (41) and Bishop Kelley (72).

For the boy’s team, three runners were not 100% and still recovering from the flu. To make things more challenging, one runner was pulled off the course due to excruciating pain.

“We only had five boys finish, which was just enough to have a team score. It was tough to watch,” the coach said. “At the end of the day, they had a good season. There were many things out of their control that went wrong. Had state been last week, the story would be different.”

Mason Mayer, won the regional race a week ago, was noticeably injured within a mile of the state race. He was, somehow, able to finish but behind the pack.

Among those in the pack was senior Lance Sallee who finished 11th overall and finished as an honorable mention All-State runner with a time of 16:36.

“Moving forward, the biggest things for us to work on our consistency with training and becoming mentally tougher,” Balenseifen said. “This sport is about repetition and routine. It’s also a mental sport as much as anything.”

The coach is looking forward to next season’s teams.

“These girls and boys will be more fit and mentally stronger from top to bottom in a year from now. They’ll be completely different runners. Next year, we are getting some very talented and competitive kids on the boys’ and girls’ teams.”

“When I first met them in the summer, I told the coaches, school administrators, and district administrators that I believe Guthrie should be top 3 on both sides’ year in and year out. I stand by that belief.”