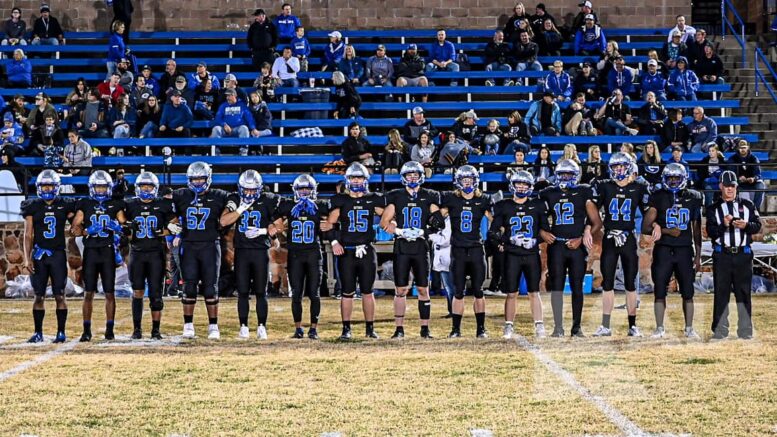 The Guthrie High School football team made quick work Friday night in a 37-0 contest with Lawton Eisenhower. Now, the Jays prepare for a short week game to finish the regular season.

The seniors finish their three-year careers 12-2 when playing on their home turf. They were honored before the game along with trainers and cheerleaders.

The Bluejays found the endzone three times in the first quarter to put any doubt away.

Junior cornerback Nate Benford set the tone on the first play of the game when he leaped and picked off the first pass of the game. Eight plays later, junior quarterback Hayden Calvert and the offense were on the board.

Next Ike possession resulted in another turnover and another touchdown.

Junior Treyvon Braxton scooped up an errand toss near midfield and scampered to the Ike 27-yard line. Four plays later, senior Isaiah Hammons ran into the endzone from four yards out to make it 14-0 with 4:17 left in the quarter.

On the ensuing drive, Ike was forced to go three-and-out and punt. This time the Jays needed five plays, including a 57-yard pass and catch from Calvert to senior Carson Wilder to go up 21-0.

Calvert scored his second touchdown in the second half with an impressive 33-yard run to make it a 27-0 game at the half.

In the second half, Guthrie got a 24-yard field goal from junior Noah French and a 3-yard run from Hammons.

With the win, Guthrie clinched a playoff spot for the third straight season and 20th of the past 21 seasons.

The Jays will be heavy favorites when they travel to winless Shawnee (0-9) on Thursday. With a win, Guthrie will finish third in the district and will either travel to Midwest City or Elgin for a first-round playoff game.