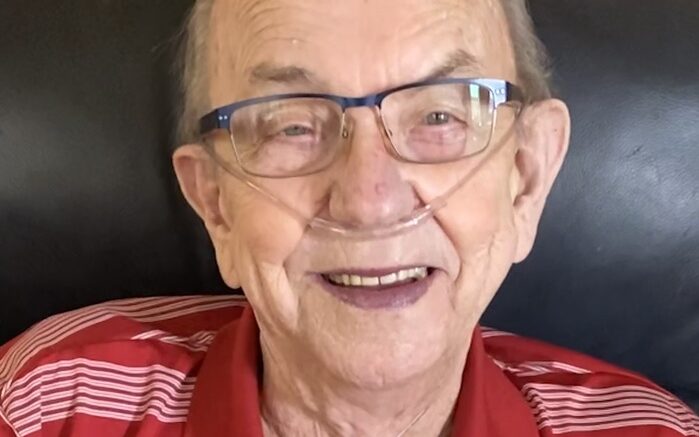 Charles Hayes was born August 29, 1937, in Hanna, Oklahoma to Woodrow and Burda (Mouser) Hayes. Charles passed from this life on August 27, 2022, in Guthrie, Oklahoma.

He grew up in Chandler, Oklahoma and graduated from Chandler High School in 1955. Charles loved talking about his long-time friends and enjoyed getting together with them during reunions.

In 1954, he met the love of his life, Gloria McCain, and they were married a year later. When he talked about marrying he would say, “I don’t know what Gloria saw in me other than she’d never had a boyfriend and didn’t know any better.” Together Charles and Gloria raised three children: Chuck, Becky and Ginger.

Charles drove a semi-truck for Transcon for over 20 years becoming a member of the “2 Million Mile Club”. He was transferred to Missouri where he became an avid St. Louis Cardinals fan even having season passes. He loved taking his grandkids to the games.  Charles rarely missed a game on television and even had a satellite for his truck so he and Gloria could catch the games while on the road. He retired from Transcon and drove for Fleetwood for a while before moving back to Guthrie, Oklahoma.  Charles then drove for Ruhl Distributing for a few years before purchasing his own truck, after which Gloria became a permanent passenger. They traveled the country together until retirement and spent every waking moment together. Charles always talked about their time on the road even after Gloria’s passing in 2017.

When his first grandchild arrived, Charles became “PaPaw Charlie.” His grandkids and great-grandkids were the apple of his eye.

PaPaw Charlie had a story for pretty much every city they’d been to. His family liked to tease him about hearing the same stories over and over. Talking baseball also never got old to him and he loved watching his grandkids and great-grandkids play baseball and softball.

Charles is preceded in death by wife, Gloria; his parents and sister, Faye McCollough.

There will be a private memorial service. The family appreciates all the prayers, support and love given to them during this difficult time.

Be the first to comment on "Obituary: Charles Ellsworth Hayes"