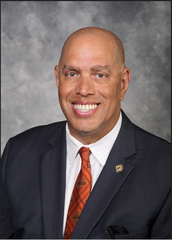 Long-time public servant Michael Thompson is announcing his retirement from state service.  Thompson, who is currently the Deputy Director at the Oklahoma State Bureau of Investigation (OSBI), informed OSBI leadership that he intends to retire this year. October 1, 2022 will be his last day in the office.

“I can’t think of a better way to end my time as a state employee” said Michael Thompson, OSBI Deputy Director. “I profoundly appreciate former Director Ricky Adams for giving me this opportunity at OSBI. I am very excited to see where the OSBI will go under new Director Aungela Spurlock’s leadership. I will always appreciate Governor Mary Fallin allowing me to serve as the Commissioner of the Department of Public Safety (DPS) before promoting me to the Adjutant General for the Oklahoma National Guard.”

Thompson began working for the state of Oklahoma in June 1984, as a Correctional Officer with the Oklahoma Department of Corrections before joining the Oklahoma Highway Patrol (OHP) in 1990. Thompson left OHP as the Commissioner and Cabinet Secretary in 2017. He then served as the Adjutant General for the Oklahoma National Guard from 2017 – 2021.

“Deputy Director Thompson has been a breath of fresh air for the OSBI as the Deputy Director,” said Aungela Spurlock, OSBI Director. “The insight that came from his years in law enforcement, coupled with his forward-thinking view and his ability to identify unique opportunities was invaluable. We wish him well in his well-earned and well-deserved retirement.”

Thompson, a Langston University graduate, was elected to the Oklahoma Law Enforcement Hall of Fame in 2019 and will be in the 2023 Alumni Hall of Fame class at Oklahoma State University.

Director Spurlock named Andrea Fielding to the Deputy Director position effective October 1, 2022. Previously, Fielding has served as the Criminalistics Division Director for almost 13 years and has been with the OSBI at the Forensic Science Center since 1998.