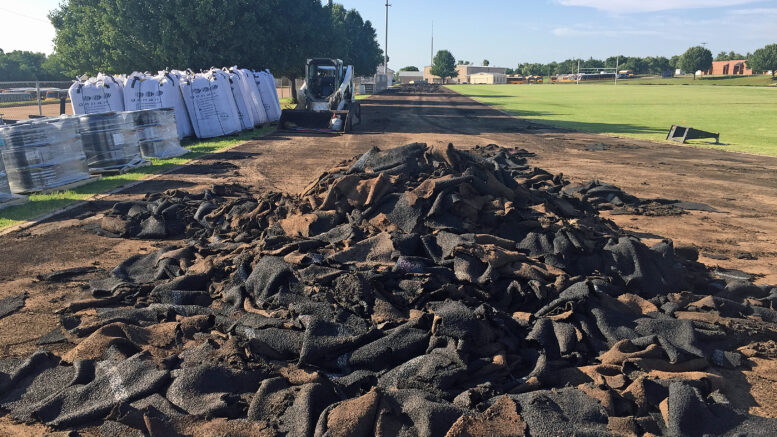 With school children on summer vacation, Guthrie Public Schools is staying busy with work projects. The three biggest projects are all taking place at the high school.

Work has been started on the HVAC system at Guthrie High School along with replacing 52-year-old seating in the school’s gymnasium and replacing the track surface.

The HVAC project is the final big-ticket item from the highly successful 2015 school bond. $1.68 million was awarded to Innovative Mechanical and will improve the school’s system while adding heat and air to the main gymnasium and locker rooms (including the wrestling room).

The original seating from the high school gymnasium is beginning to disappear as the district will be adding new seating to the south (home) side.

The $72,970 project was awarded to Performance Surfaces, who was the same company who replaced the north (visitors) side bleachers in 2014.

The new seats are expected to be installed in July.

The high school track will soon be receiving some much-needed attention with a new surface.

In the successful 1996 school bond issue, a new seven lane track was installed, but surface repairs have not been able to be completed over the last two decades.

This week, Merritt Tennis and Track Systems began tearing up the old service.

The $94,183.02 price tag is being funded by three funds, including the 2015 school bond, the district’s building fund and interest earned from the bond funds.

“We were able to spend our (bond) dollars wisely and to be able to make that first bond go so much further. (They’re) much needed for our district,” Board of Education President Tina Smedley said.

Be the first to comment on "Photos: Summer upgrades ongoing for GPS"