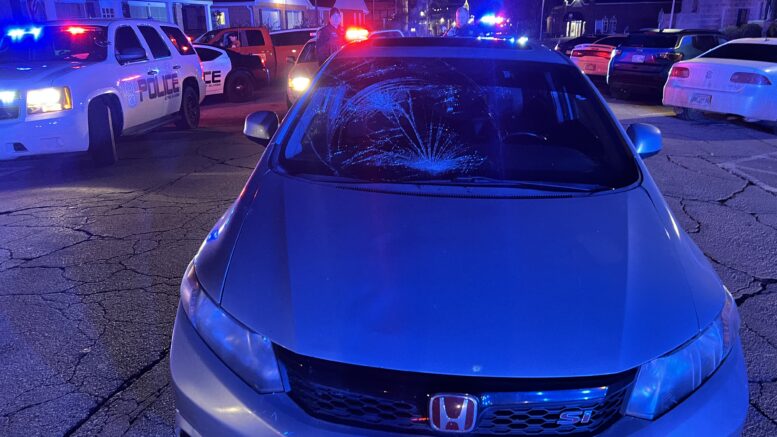 Updated on Nov. 30, 2022 — Guthrie police officials tell Guthrie News Page that the mother and baby in the incident are doing good.

Sgt. Anthony Gibbs says the mother suffered some scrapes and bruises but is okay as is the baby.

A pregnant woman was transported to an Oklahoma City hospital late Sunday night after being struck by a vehicle.

A Guthrie police officer was near the 400 block of E. Oklahoma Ave. when the woman was hit by a gray 2012 Honda at approximately 11 p.m.

The officer immediately requested Guthrie EMS, who was on the scene within minutes.

The woman was believed to have been crossing Oklahoma Ave. to the south from her parked vehicle on the north side of the street.

The Honda was traveling eastbound at the time of the crash. The woman was found lying in the westbound lane an estimated 30 feet from her parked vehicle.

The impact, which appears to have taken place near the middle of the roadway, left heavy damage to the front windshield and multiple dents in the hood.

Guthrie Police continue to investigate the case, including the possibility of high speeds as a witness could hear a vehicle accelerating.

The woman was transported to St. Anthony’s Hospital in Oklahoma City for her injuries.

The vehicle was towed from the scene.

Be the first to comment on "Update: Pregnant woman struck by car on Oklahoma Ave."