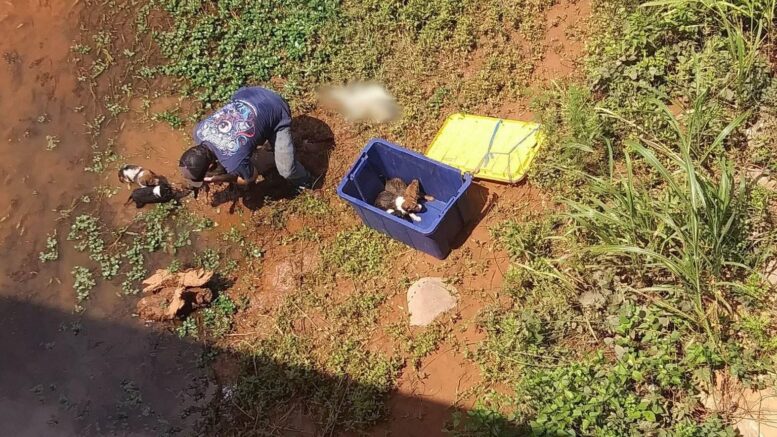 Seven puppies were rescued after a group says they were thrown over a bridge east of Guthrie in Logan County.

The team at the Bella SPCA Rescue Center said they were contacted over the weekend after eight five-week-old puppies were found below a bridge near South Westminster and Triplett Road.

“The people who found the puppies described the scene and it is clear the puppies were thrown over the bridge while inside a plastic container that was strapped/taped shut,” the rescue center said in a post on social media. “We can only assume whoever did this thought the container would land in the water but instead the container hit the bank and broke open.”

One of the puppies did not survive.

The center says the seven other puppies survived without any serious injuries and are now in their care.

Bella SPCA is working with Logan County deputies to try and attempt to find those who allegedly dumped the puppies.

“It will be almost impossible to know who did this or why.”

The rescue team examined the puppies, bathed them to remove the mud, treated them for fleas/ticks and fed them.

“Today they are all bright, alert, and doing what puppies do.”

The puppies will remain in care for the next few weeks and will soon have a chance to be adopted into new families.

While the rescue center believes it may be a long shot to find those responsible, they are asking if anyone has any information or recognize the puppies to please contact them at info@bellaspca.org.

“We will make sure your information is given to law enforcement and you remain confidential,” the rescue center said. “We have also started a little fundraiser for these pups so that they and other puppies like them will always receive the care they need.”

The Bella SPCA Adoption Center is located in southern Logan County and was founded in 2007.