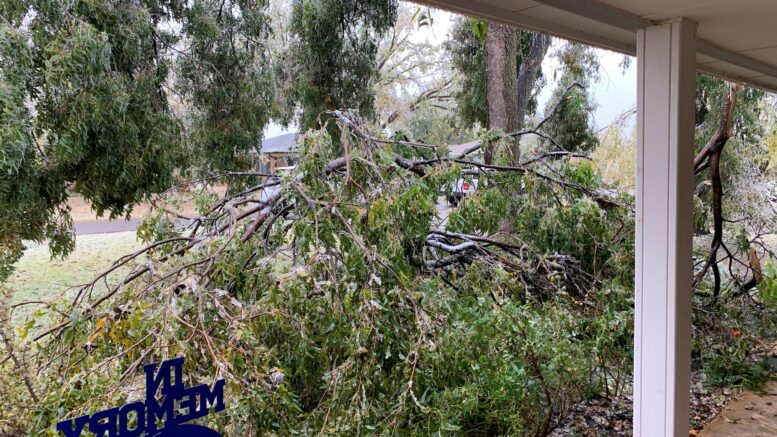 OKLAHOMA CITY – Governor Kevin Stitt announced the State of Oklahoma has requested a Major Disaster Declaration from the federal government related to the devastating early season ice storm that began on October 26.

The multi-day storm system produced up to two inches of ice in some areas, left hundreds of thousands without power and caused millions of dollars in damages for local governments and tribes.

Damage assessments are ongoing, but in these 13 counties alone, the storm resulted in an estimated $27 million in debris removal and other damages.

“The combination of three days of freezing rain and an early fall time period made this ice storm especially destructive to a large portion of our state,” said Oklahoma Department of Emergency Management and Homeland Security Director Mark Gower. “We hope that the federal government will act quickly and approve Governor Stitt’s request so our hard-hit communities can begin to recover some of the extensive costs associated with responding to this significant winter storm.

Due to FEMA policies as a result of the pandemic, damage assessments had to be conducted virtually by state and local emergency management using photos, videos, measurements and GPS data and then validated manually by FEMA Region 6 in Texas.

While this created a more time-consuming procedure, the Oklahoma Department of Emergency Management and Homeland Security (ODEMHS) was able to quickly develop an online tool to make the assessments as efficient as possible for both the users and for FEMA.

“I commend the dozens of city and county emergency managers and ODEMHS staff who have worked tirelessly to collect and enter more than 1,000 damage reports in order to make the case for federal assistance,” said Gov. Stitt. “I urge the federal government to quickly approve this declaration to speed up our recovery.”

If approved, the designation would deliver federal funding to assist municipalities, counties, tribes and rural electric cooperatives with debris removal, infrastructure repairs and other costs associated with responding to the storm.

Governor Stitt stressed that the state will continue to request additional counties be added to the Major Disaster Declaration in the coming weeks.