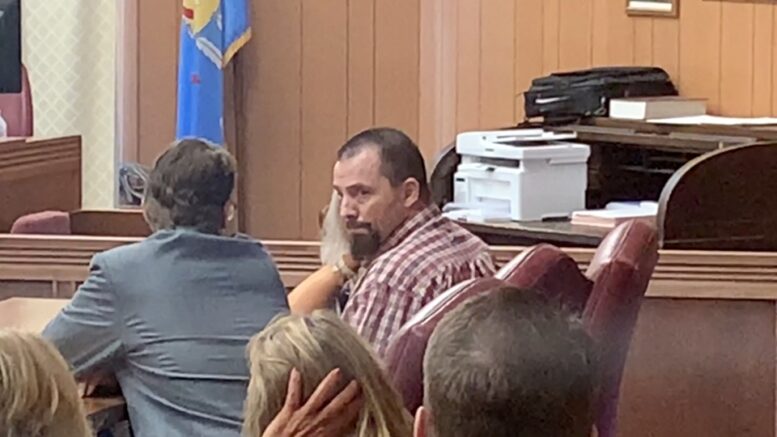 The final court proceeding in a case that rocked Logan County in 2017 came to an end on Friday afternoon inside the Logan County Courthouse.

Convicted cop killer Nathan LeForce was formally sentenced to prison without the possibility of parole in the shooting death of Deputy David Wade. The sentence will run consecutive with the two other charges of larceny of a vehicle and armed robbery. Related article: Leforce found guilty of first degree murder; now faces the death penalty

LeForce shot Wade while the deputy was serving an eviction notice in Mulhall, hitting Wade four times at close range. LeForce then stole Wade’s truck and drove to a gas station, where he was seen on camera trying to break into a vehicle before carjacking a woman.

Judge Phillip Corley issued the most severe punishment allowed by law after a jury could not unanimously agree on the death penalty last month. The final juror count was 11-1 in favor of the death penalty.

The judge told LeForce he is lucky that he’s not here for a death sentence.

When asked if he wanted to say something, LeForce said yes as he made his way to the podium with shackles.

LeForce said Wade did not deserved what happened to him and that he was sorry.

The Wade family read three impact statements from the mother, grandmother and brother.

Wade’s mother, Sharon Wade, said her son is dead because “he had on an uniform.” During the trial, evidence was heard that LeForce had threaten to kill law enforcement officers.

His (LeForce) children will get to visit him in jail, while my family has to go to the cemetery and visit David.

LeForce’s lead attorney, Gretchen Mosley, told the judge they will not appeal any of the court’s rulings.

“It’s done. It’s over. Hopefully, the Wade family can start to heal now,” Mosley said outside the courtroom.

Be the first to comment on "Video: LeForce sentenced to prison without parole"