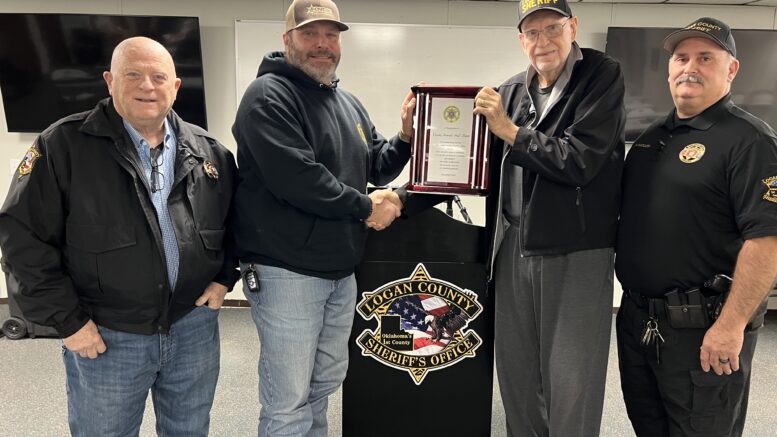 The time and hours that Reserve Deputy Harold “Hal” Pettitt has given to Logan County and the Logan County Sheriff’s Office have not gone unnoticed. On Saturday, he was recognized for his servant’s heart.

Last summer, Pettitt learned from doctors that cancer had taken over his body. He was given the dreaded news. Three months, maybe six, maybe nine, or possibly 12.

Though the reserve deputy may have slowed down a bit in the last few months, he continues to fight with medications that he believes will help remove the disease. For those who know Hal, 83, he has and will give it his all. Just like he has done for the Sheriff’s Office since 1998.

Despite feeling weak, Hal attended this week’s reserve deputy meeting where he was recognized for his years of service.

Inside the training offices of the department, Lt. Greg Randolph read from a distinguished plaque and shared his kind words to Hal on behalf of the Sheriff’s Office.

“This is something we want to give you and your family in appreciation for the time you and Evelyn have given to the county,” Lt. Randolph said to Hal. “I know all the things you did that a lot of guys don’t know about.”

Despite not being a part of the reserve duty program, Hal would probably wear his uniform to his church to be with the children during Halloween events to allow them to know they were safe.

During parades, you could find Hal on Oklahoma Ave. at Oak Street on his four-wheeler. At the beginning of his career, you could see him on patrol while on horseback.

Before there was a transport division for LCSO, Hal took it upon himself to transport prisoners to court hearings or to other jails inside his trusty but cramped Crown Vic patrol unit.

Hal was precise with his weapon as he never missed a qualification round. He says he is “thankful” that he’s never had to use his weapon before but remembers having to draw a few times while out on manhunts.

“You do more for us. Our morale, our service that we learned from you over the years,” Lt. Randolph told Hal as he looked over his plaque.

Hal, who is not shy to talk to anyone or share a story or two, was taken in by the moment and for once was short on words.

“It’s been a lot of fun,” Hal said to his fellow reserves. “(I was) a little stressed a time or two, but it was exciting, and I enjoyed every minute of it.”

“Thank you for your years of service. You’re a valuable part of this team regardless if you’re packing heat or not. You being here, I assure you, is a breath of fresh air.”

Be the first to comment on "Watch: LCSO honors Deputy “Hal” Pettitt with Lifetime Service Achievement"