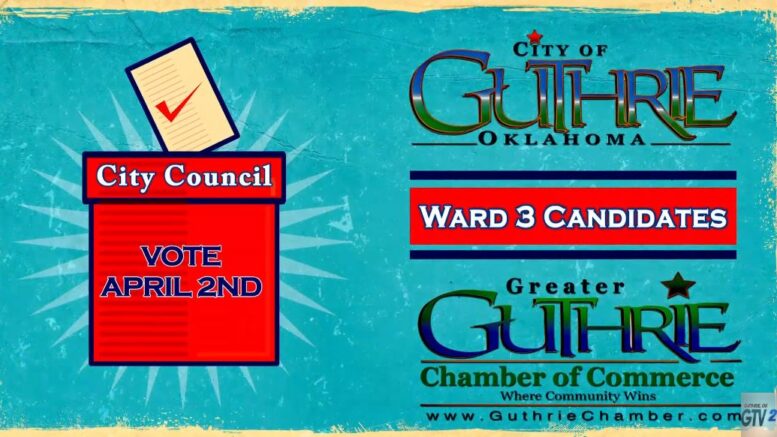 The upcoming April 2 election will have two seats up for grabs on the Guthrie city council. Check out the introduction videos of the four candidates and a candidate that did not draw an opponent.

You can view the candidate videos following this article hosted by Guthrie Chamber of Commerce CEO Tracy Zserdin.

A forum will be held on Monday, March 25 inside City Hall beginning at 6 p.m. The forum will be streamed live on Guthrie News Page.

A total of six candidates filed to run for the Guthrie city council.

Mayor Steve Gentling, who has served the position since 2015, will earn a third election after not drawing an opponent. The term for mayor runs for two years.

Vice-Mayor and current Ward 1 member Ed Wood did not file for re-election. The lone candidate to file for the Ward 1 seat was James Long.

In Ward 2, councilman Brian Bothroyd will seek re-election after winning his first council seat in 2015. He will go up against former mayor Chuck Burtcher.

Burtcher served six years as the City’s mayor with his last council meeting coming in May 2013.

In Ward 3, Sharyl Padgett will seek a second term and will be challenged by Don Channel.

Be the first to comment on "Watch: Meet the city council candidates"