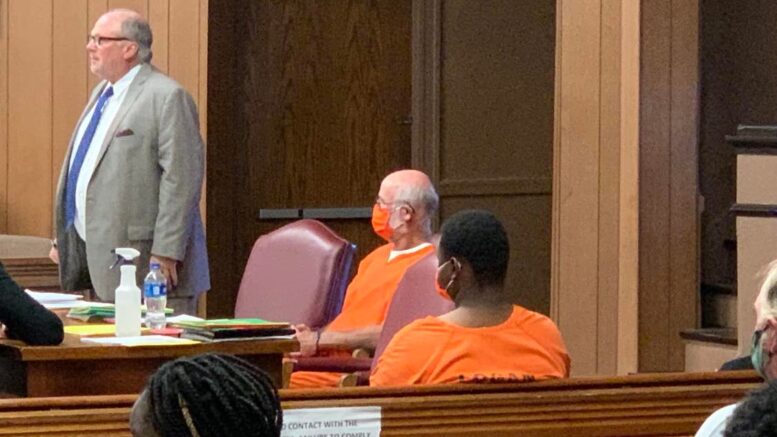 Dan Triplett sits behind his attorney Ronald Wallace on Nov. 18 inside the Logan County Courthouse.

An attorney for Dan Triplett, who is accused of shooting and killing Brent Mack in September, has filed a motion for his client to receive bail.

The motion was filed on Nov. 1 in District Court by Ronald Wallace and The Wallace Law Firm.

Triplett was charged in the death of the 50-year-old Mack who went missing in late September and whose body was recovered in northern Logan County. Related article: Videos assisting investigators with suspected septic tank homicide; bond denied

Triplett was charged with murder in the first degree and desecration of a human corpse on Oct. 25. He was ordered without bail by a Logan County judge.

In the motion for bail, the attorney describes Triplett’s life, including his education, business and family. The attorney added that Triplett was a Guthrie city council member for two years in the late 1980’s.

“His reputation in the community is stellar and he has no mental health issues,” the attorney stated in a court document.

The attorney listed a group of citizens, who would “vouch for his reliability” if given bail. He added that Triplett would surrender his passport to the court clerk.

The defense request the court to set bail in the amount of $250,000 with electronic monitoring.

The motion was set to be heard on Thursday, but Triplett’s attorney insisted that a court reporter be present. A reporter was not requested ahead of time and the motion was moved to Dec. 3 at 2 p.m.

Triplett was seen inside the court room wearing a jail issued orange suit along with an orange mask, pink ankle cuffs and blue hand cuffs.