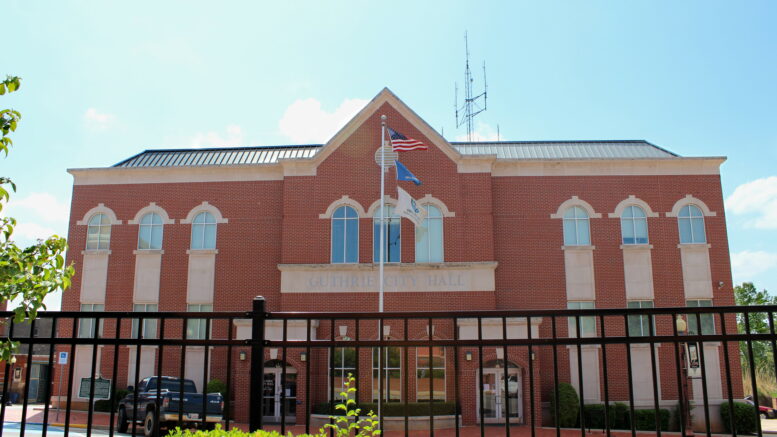 Updated on Jan. 27, 2023 — The council held a less than two-minute special meeting on Jan. 26 to amend the monthly stipend amount from $600 to $300. Related article: Council amends proposed stipend dollar amount to $300 a month; voters to decide on April 4

Updated on Jan. 24, 2023 — The Guthrie city council will meet this week in a special meeting to further discuss a proposed stipend for city council members.

The Guthrie city council voted Tuesday evening to call for an April election. Voters will decide if elected council members should receive an increased monthly stipend for their elected service.

The topic of discussion was placed on the agenda by Ward 2 Councilman Brian Bothroyd.

Council members, including the mayor, are paid $1 for an annual salary, according to the City’s charter (Article 2, Section 2-8). Now, the council is seeking to be paid a $600 stipend per month.

Council members are elected non-partisan for four-year terms, while the mayor is a two-year term.

If approved by voters, each council member would be compensated $7,200 a year. The total cost of the seven members would come at a cost of $50,400 per year and would be paid out of the City’s general fund.

“We all agreed to a $1 a year, I get that,” Bothroyd said. “Times have changed. There is a lot more demand for council members. I think it’s time to move it up to this century.”

Mayor Steve Gentling shared the time commitment that councilmen have to take on.

“In the last six months, we have averaged 205 pages of documents (city council agendas that are prepared by City staff) to review for a council meeting. And that’s just to get ready for what we do here (council meeting). There’s obviously interaction with citizens throughout the weeks and months. There’s a fairly significant time consumption.”

Councilman Don Channel followed quickly by saying, “that’s just the base level” on reading the agenda packet. “What’s on those pages sometimes determines how many more hours that you put into it with research or talking to citizens.”

City Attorney Billy Wheeler supplied the council with wages of other cities. According to those numbers, Midwest City pays their mayor $400 a year and council members $300. Stillwater pays the mayor $100 per meeting and the councilman $50 per meeting.

According to Bothroyd, the numbers supplied by Wheeler were “outdated.” He says the City of Edmond increased their council pay from $350 to $700 in July 2022.

“I know (we)have dedicated a tremendous amount of time towards projects that go unseen by the public,” Bothroyd said.

Councilman Jim Case says the council has accomplished a lot.

“We are obviously doing something right. We are putting in a lot of effort.”

Channel says regardless of the vote, he will be at the meetings.

“I signed up for a $1 a year. I’ll be here at the next meeting, but it is nice to be acknowledged sometimes. Even at that rate ($600), if you’re going to be effective in this job that’s still not near the time that a lot of us put into it.”

He added, “we didn’t sign up to be on the payroll, but there’s transportation, meetings, and all these things that we do. A lot of times we take off work or we skip functions, (but) I don’t see us being out of line.”

“It’s not designed to be able to live on,” Bothroyd said of the proposed stipend. “We are not wanting people to sign up for council because they’re going to quit their job and survive on (the stipend).”

The council approved the agenda 5-1 with Channel making the motion with Case following up with a second. Channel, Case, Bothroyd, Taylor, and Gentling voted yes for the vote of the people. Williams placed the lone no vote. Councilman James Long was not present for the meeting.

The election will take place on Tuesday, April 4 with the polls opening at 7 a.m. and closing at 7 p.m. Registered voters within the Guthrie city limits will be eligible to vote.

Be the first to comment on "City council members seeking added compensation; citizens to decide"