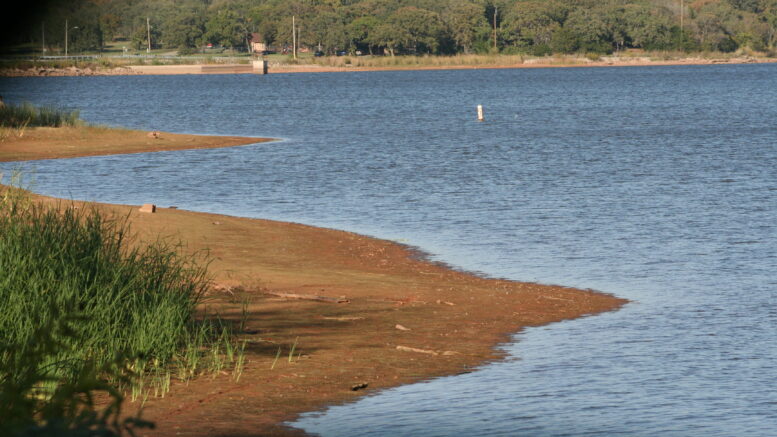 If you drive by the two lakes in Guthrie, you will see the current lake levels are reaching a low point, but city officials still report there remains plenty of water for citizens’ consumption.

On Friday, Maker said he’s not recommending any means of rationing at this time but informing citizens who have shown concerns.

“Based off of 1.5 MGD daily flow we would have approximately 187 days left on Lake Guthrie and 291 days left on Liberty Lake,” Maker said as he broke down the 478 days.

Naturally, with rainfall, the number of days available for water would increase.

City Manager Leroy Alsup added, “Of course, this supply could be shortened by multiple major water leaks that we were unable to repair in a timely manner or major structure fires.”

Guthrie also has the benefit of Cottonwood Creek.

“I know this sounds alarming, but we currently have full flow going into Liberty Lake from the Cottonwood,” Maker said.

He added that they currently are unable to share the actual flow rate at this time due to the flow meter being down.

“Based off of the design of the pump station it should be pumping 3000 GPM to Liberty. The actual flow leaving our Plant is an average of 1.3 MGD,” Maker said. “We are making 8 to 10-hour runs daily which breaks down to 2400 GPM leaving the plant. With this being said we should slowly be gaining on Liberty Lake as long as we can feed from the Cottonwood. This average will go up in the summertime.”

With an aging infrastructure that the City continues to find funding to replace miles and miles of water lines, the City is hoping to avoid any added major water leaks.

“I do think if we were to have a couple major water leaks that we were unable to repair in a timely manner, major structure fires, or if we were to not receive any spring rains then yes we may need to consider a rationing plan early summer,” Maker said.