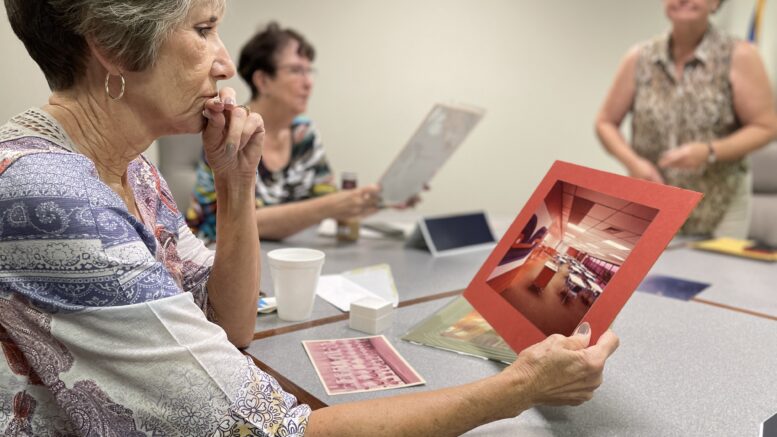 STILLWATER, Okla. – What started with a simple Facebook post ended with a reunion nearly a half-century in the making.

In July, Claudia Gates-Lentz was preparing to move from Branson, Missouri, to Ralston, Oklahoma. Her mother’s health was declining, and Claudia felt it was time to come home. Preparing to downsize, she began sorting through boxes she hadn’t seen in years. Tucked between papers, folders and a lifetime of miscellaneous content, Claudia found something that took her breath away – a group photo of Meridian Technology Center’s class of 1976 Practical Nursing students, the program’s first graduates.

The photo, now yellowed with age, was a collage of professional headshots of her classmates – twenty-two women, each dressed in a crisp white uniform, a matching nursing cap and their official nursing pin. Handwritten in black calligraphy, the students’ and instructors’ names were underneath each photo, along with any class officer role they held.

As memories from her time in the program came flooding back, Claudia began to wonder where her former classmates were. She took to the internet and began searching for names. First, she used Google and then moved on to social media.

“I thought finding everyone would be easy,” she said of her initial search.

It ended up being more of a challenge than she expected, though.

“I had a picture from nearly 50 years ago that I used to match with current faces from social media profiles. I found one classmate and thought that couldn’t be them because they looked old,” she said, laughing.

That’s when Claudia decided to send a message to Meridian Technology Center’s Facebook page. A post was shared on the school’s page, and it didn’t take long for followers of Meridian’s page to begin tagging friends and family members in the photo. Within hours, social media had worked its magic. Classmates who hadn’t seen each other in decades were now rekindling friendships and sharing memories of their time at Tech.

That led Claudia to propose the idea of a 50-year reunion. Representatives from the school extended an invitation for Claudia and her classmates to return to campus and see how the campus and the Practical Nursing program had changed. Before long, a date was set to correspond with a local 50th high school reunion of classmate Maureen Kopf who now lived in West Virginia.

The last time Claudia, Maureen and Lanette Mize saw each other was at their Practical Nursing graduation on August 8, 1976; however, it didn’t take long for the trio to make up for the lost time. In addition to updating each other on their marriages, divorces, moves, career changes, and more, they quickly began to relive many of their most cherished memories as students.

Claudia remembered reading a newspaper announcement that the newly formed school, then named Indian Meridian Area Vocational-Technical School, was starting a Practical Nursing program. She recalled learning that more than 200 people had applied. The applicant pool was cut down to 50, and then information packets were mailed to the 22 who were selected.

“If you got a little envelope, it was a ‘no thanks’ from the school. If you got a big envelope, it meant that you got in,” she explained. “After all these years, I can still remember opening that fat envelope and finding out that I was accepted.”

Maureen and Lanette recalled similar experiences with learning they were selected for the program. Maureen also remembered coming to class the first day in casual clothes. That was the last day students could be out of uniform. From then on, students were expected to wear either the classic white skirt uniform or a pinstriped top and pants. She recalled visiting Stillwater’s Katz Department store to purchase her uniform.

“The cap – you can’t forget the cap,” Lanette added. “Anytime you were inside, you had to have on the cap. Anytime. And, it was never to be worn outside.”

While Claudia, Maureen and Lanette had shared experiences as classmates in the newly formed school, in many ways, that’s where their similarities ended.

Claudia worked in the medical field for a few years before moving into a career in Oklahoma’s oil and gas industry. She traveled the world with work, eventually retiring in 2012 as president of the International Board of Directors for Fraud for Conoco Phillips.

Lanette remained in her hometown of Guthrie. In 1986 she graduated from the nursing program at the University of Central Oklahoma, formerly Central State University. She spent the rest of her career caring for geriatric patients in nursing homes and a palliative care unit within Oklahoma’s Veterans Affairs health care system.

Maureen married Virgil, her high school sweetheart, and worked various jobs while he was in graduate school. The family eventually settled in the Blacksburg, Virginia, area where Virgil earned a doctorate from Virginia Tech. In 2009, Maureen decided she wanted to complete her nursing degree, and in 2015 she graduated with a bachelor of nursing degree. She currently works as a permanent substitute nurse in her local school district, where she rotates among its 68 schools.

“Whether we’re providing care to our patients or our parents, there’s no doubt that what we learned here has carried us through life,” Claudia commented as the others shared their stories.

In addition to catching up on their past, time was also spent with their profession’s future.

The highlight was visiting the Practical Nursing program’s simulation lab and getting a close-up look at the manikins students now use to practice their skills. When they were students, the school had one, possibly two learning labs. Students now have access to multiple classrooms and study rooms, manikins with a variety of ailments, and a four-room mock hospital that is outfitted with programmable, state-of-the-art SimMan 3G responsive manikins from Laerdal and a SynDaver Anatomy manikin that features life-like bones and body systems.

The campus tour came full circle when Claudia, Lanette and Mareen met with students who were completing their first week in the program as well as students who would soon graduate. The alums used the moment to offer congratulations, well wishes and wisdom to the next generation of nurses.

“Keep it up. You will get there,” Maureen said, offering words of encouragement. “There will always be hills and valleys, but I want to encourage you to keep pushing forward. Keep learning. You’ll enjoy a good life if you’re passionate about your work.”

Focused on the Future

By the end of the day, Claudia, Lanette and Maureen were even more determined to find the rest of their classmates and former instructors. Their goal is to locate everyone before August 8, 2026, the 50th anniversary of their graduation.

They know they can’t do it alone, and they are hopeful that others will recognize either names or faces from their graduation photo and provide information on their whereabouts. The group is still searching for information on classmates Amy Gregory, Brenda Kraft, Jackie Wooden, Jenny Little, Jo McNutt, Judy Carroll, Julie Gillett, Kaye Thompson, Linda Jo Hartman, Lois Jefferies, Mary Jones, Michelle Rosilier and Vivian Cotton.

In addition to the photo on Meridian’s Facebook page, Claudia shared it on the Forgotten Oklahoma Facebook group on August 29. Information on classmates can be sent to Claudia at cr.lentz@yahoo.com.

Instructors of the inaugural class of Practical Nursing students were Sharon Krautsch and Debra Sharp. Denelda Golden was the program director and Mary Lawler assisted with the program’s startup.

Meridian Technology Center has been a driver of economic development since 1975. With a mission to educate, enrich lives and secure economic futures, Meridian offers full-time career training programs, short courses, workforce and economic development assistance and entrepreneurial support to residents from the Agra, Carney, Glencoe, Guthrie, Morrison, Mulhall-Orlando, Pawnee, Perkins-Tryon, Perry and Stillwater school districts. The school has locations in Stillwater and Guthrie. Meridian is one of 29 schools within Oklahoma’s CareerTech system.