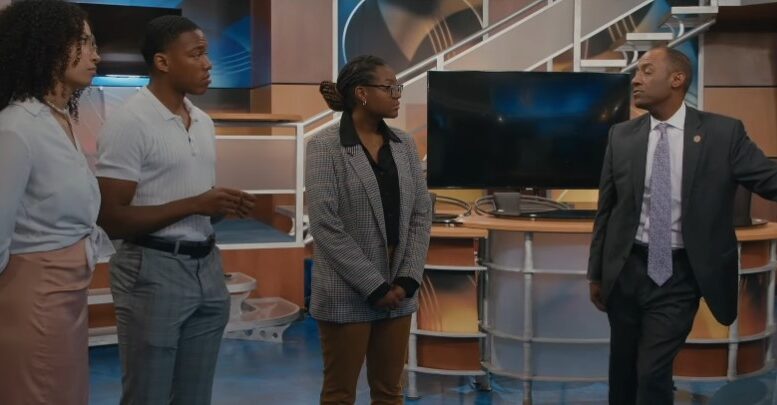 President and CEO of Griffin Media David Griffin said the company was working to bring new, advanced technology and sets to the newscast. Installing new equipment in their current building would tie them to the location for the next 15 years. Griffin Media had another goal in mind, that is to plant its flag in downtown Oklahoma City.

This left Griffin with a dilemma: What would the company do with its existing home of more than seventy years?

“If we abandon this building there is going to be a hole in this community, and we just did not want to leave this community alone,” Griffin said. “So, we went on a search to see how we could be a part of something bigger than ourselves. And then it just dawned on me, Langston has a journalism program.”

The gift totals over $10 million, and includes the building, the surrounding land, all the existing equipment used for the News 9 newscast, every table and chair, the computers, the fiberoptic cabling and more. The site will also be home to the Center for Media and Community Advancement at Langston University funded in part with a grant from the Inasmuch Foundation.

Langston University President Kent J. Smith, Jr. said this gift will not only impact our journalism program, but it will also impact the entire university community.

“There is an entire business behind news production. From computer technology to marketing and sales, our students will have the benefit of learning here. Now we can think of Oklahoma City and our Oklahoma City campus in an entirely different realm that we could not imagine before,” Smith said.

This gift will revolutionize how Oklahoma’s only HBCU produces new journalists and will impact every aspect of the profession.

Griffin Media has committed to a long-term unprecedented partnership with Langston University. News 9’s on-air and behind-the-scenes talent will teach classes, mentor students and provide opportunities for LU students to learn from them on state-of-the-art equipment.

“If you’re looking for something to believe in that will fundamentally change not only Langston University but journalism as a whole there is no doubt in my mind that this is it,” Smith said. “If you cannot get excited about that I do not know what gets you excited.”