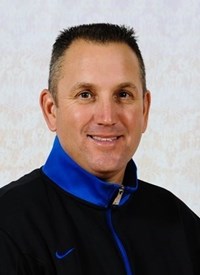 Squires Field left an impression on a young Mike Davenport and one particular university in gold rush country continues to benefit from his time in Guthrie.

Coach Davenport is coming back to Oklahoma and he’s bringing his softball friends from Dahlonega, Ga. with him to compete in the NCAA DII Softball Championships at ASA Hall of Fame Stadium in Oklahoma City.

Davenport, a 1987 Guthrie High School graduate, will lead his sixth-ranked North Georgia Nighthawks (49-7) against Univ. of Indianapolis on Thursday afternoon.

“I am beyond excited to be bringing a team to the state of Oklahoma, which I still call “home”, with an opportunity to win a championship,” Davenport said.

Davenport has built a culture of championships at North Georgia winning nine conference regular season titles, eight conference tournament crowns and has recorded an overall record of 646-191 (.771) in his tenure. He has quickly established UNG as a powerhouse in NCAA Division II softball, taking North Georgia to three-consecutive Division II College World Series from 2009-2011. The Nighthawks were just one win away from a fourth NCAA DII CWS in 2014, ending their season in the Super Regional.

The 2015 Nighthawks squad won the NCAA DII Southeast Region this week prior to winning the Peach Belt Conference regular season and conference tournament.

The coach says Guthrie provided the ground work for him and what he has been able to accomplish at UNG.

“A lot of my coaching groundwork was laid at Squires Field and so many great friendships were made with past teammates and coaches. Guthrie will always be a special place for me, it’s where I fell in love with the game of baseball and has transferred into my softball coaching profession.”

Along with his success at UNG, Davenport served as an assistant coach at the sport’s highest level as he completed a term on the staff of the USSSA Florida Pride in the summer of 2014. He assisted the Pride to collect the Cowles Cup, which recognizes the National Pro Fastpitch champions.