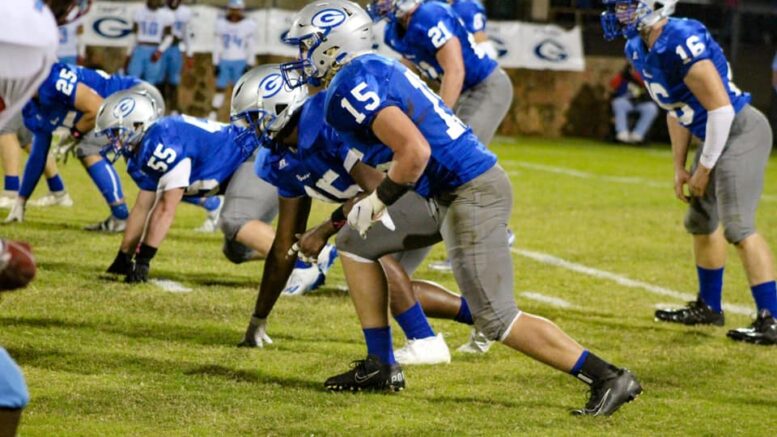 The Guthrie defense prepares to go after the Eagles offense in a 28-10 win. Photo courtesy of Kaia Calvert.

It took four quarters to do so, but the Guthrie Bluejays held off Lawton Eisenhower for their third straight win. Now, a week 9 showdown awaits with McGuinness with the winner hosting a home playoff game.

Guthrie scored four total scores with the offense and defense coming away with two scores each to defeat Ike, 28-10. The Jays scored twice in the final 68 seconds to make distance themselves on the scoreboard.

The Eagles booted a 43-yard field goal with 7:45 left in the game to pull within four, 14-10, of the Jays in a defensive battle from both teams.

Junior Carson Wilder scored the game’s first score with an 11-yard touchdown reception from sophomore quarterback Hayden Calvert near the end of the first quarter.

Ike tied the game, 7-7, midway through the second quarter with a 33-yard passing score.

The score remained the same until junior Jackson Walters stepped in front of an Eagles pass for the interception. Then, he showed off his speed as he busted down the Guthrie sideline for a 60-yard pick six.

Leading 14-10, Guthrie got some breathing room when junior running back Isaiah Hammons took off on a 34-yard run to up the lead to 21-10 with 1:08 left in the game.

The final score came on another pick six. This time senior Deandre Jones was in the right place at the right time as the ball ricocheted off an Eagles receiver and into Jones hands. Jones ran in the score from 43 yards. He finished the game with multiple tackles and three interceptions.

Senior defensive lineman Chris Shaputis was named the Guthrie NORTHCHURCH Player of the Game as he finished with 10.5 tackles, four sacks, four tackles for lost and six quarterback hurries.

The Bluejays play host to Bishop McGuinness on Friday night. The winner will finish second in the district play a first round game at home. The loser will have to travel for round one.

The Irish will enter with a 5-3 record with their three losses coming from quality opponents, including Coweta, Del City and Carl Albert.