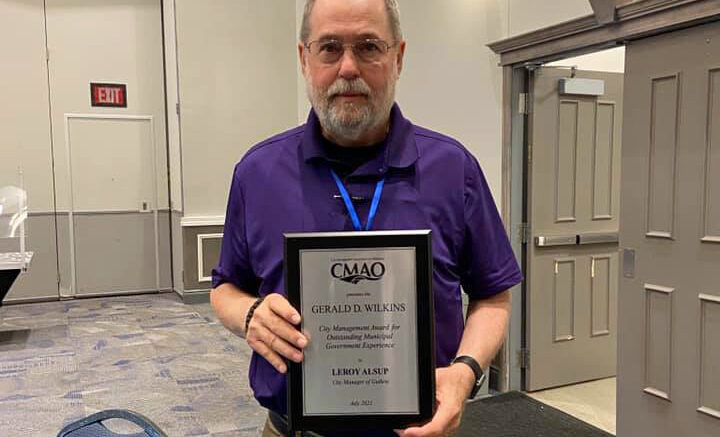 Alsup was among a select of city managers across Oklahoma to be nominated by the CMAO for the prestigious 2021 Gerald Wilkins Award. The award recognizes a city manager in the state for outstanding performance.

“What an honor,” Alsup said on receiving the recognition at the summer conference on July 22. “Thanks for #TeamGuthrie and all of the great municipal employees and community partners that I have worked with over the years for making me look good.”

Recipients of the award are credited with strengthening city management through their stable length of service, dedication to civic activities and participation in and contribution to CMAO.

“Guthrie is lucky to have you,” OML Executive Director Mike Fina said in a photo post with Alsup.

City of Guthrie’s Kristin Elsenbeck says she was excited to learn that Alsup had earned the 2021 Gerald Wilkins Award.

“I have the opportunity to work with Leroy nearly every day. I see him pour a lot of time, energy, and heart into this community, Elsenbeck said.

She continued, “Among other things, Leroy is intelligent and has remarkable project management skills. The City of Guthrie has benefited from Leroy’s leadership since 2017, and it shows. Our town, our community, and our City workforce have grown tremendously through his guidance. I can’t think of a more deserving recipient for the City Manager of the Year Award, and I am so pleased to see his dedication acknowledged in this way.”

Alsup has served as the City’s top administrator since Feb. 2017 and is the longest tenured city manager for at least the past four decades. In March, Alsup agreed to a multi-year contract from the city council and runs through September 2024.

CMAO promotes the proficiency of city managers and administrators, assists in the improvement of city administration and acts as a clearinghouse for information on matters of interest to all local governments.