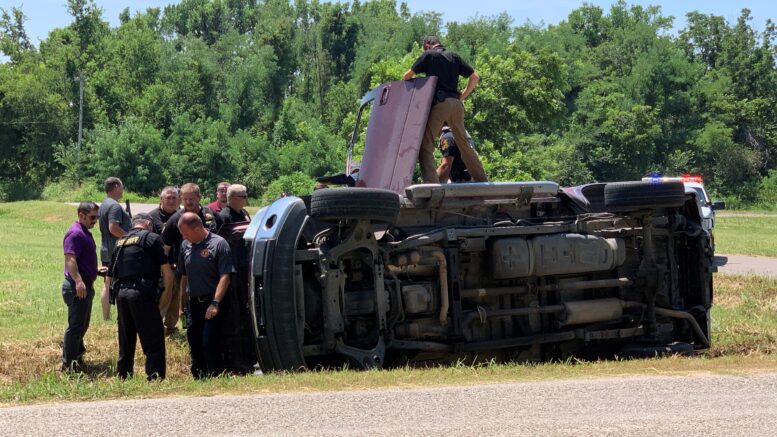 Luckily, at the end of a high speed pursuit through downtown Guthrie, no one was severely injured. However, there were some close calls as speeds reached over 100 mph.

Law enforcement officers were working traffic along Interstate 35 in Payne County when they pulled over a red Ford truck. As officers approached the truck, the female driver took off just before 1 p.m. on Tuesday.

The driver eventually made her way onto Highway 77 and into Logan County with speeds topping 100 mph.

Officers from the Logan County Sheriff’s Office and Guthrie Police Department, along with the Oklahoma Highway Patrol, made their way north of town to help intercept the pursuit.

The suspect was able to escape two sets of stop sticks near the Cimarron River and Beamer Road, which allowed the driver to reach the Guthrie city limits.

Officers began blocking the intersections as speeds continued at an estimated 85 mph. The driver sped by the intersections of Noble, Cleveland and Oklahoma Ave. before making a scary west turn onto Harrison Ave. Somehow the driver was able to maintain control and not collide with the sandstone wall of Jelsma Stadium.

The pursuit continued on Harrison Ave. until the driver made a south turn onto 2nd Street. Eventually, the driver crashed out at 2nd Street and Grant Street by rolling the truck onto its side.

Officers had to bust out the front windshield to get the suspect out, where she was then taken into custody.

The suspect had a warrant for her arrest in Beckham County and was found with marijuana.

She was transported to the Payne County Jail.

Be the first to comment on "Video: High speed chase zooms through Guthrie"