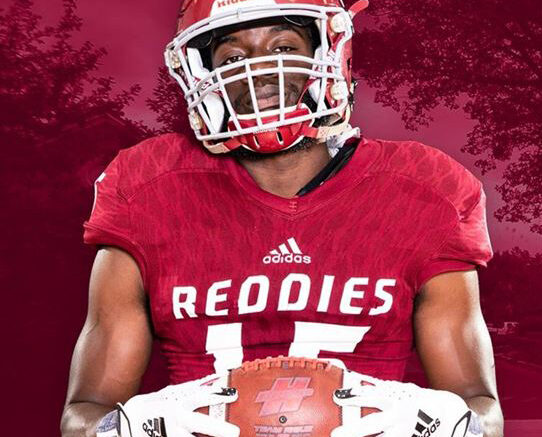 RUSSELLVILLE, Ark. — Following one of the best receiving performances in school history against UAM, Henderson State’s L’liott Curry was named Great American Conference Offensive Player of the Week on Monday.

Curry was simply unstoppable against the Boll Weevils and finished the night with 10 receptions for a career-high 228 yards and four touchdowns. The senior from Guthrie, Oklahoma pulled in touchdown catches of 6, 48, 58, and 62 yards in the 58-18 win.

His 228 receiving yards were the fourth-most in a single game in school history and his four touchdowns marked only the second time in the last 20 years that a Reddie receiver has pulled in four or more touchdown passes.

Curry, who was a 2021 Preseason All-American by multiple publications, has lived up to that billing so far and leads the GAC with 416 receiving yards. He is second in the league with five touchdowns and is averaging a conference-best 138.7 yards per game. The GAC weekly award is the second of Curry’s career at Henderson and is the first for a Reddie this season.

The Reddies (3-0) face their toughest test of the season this Saturday night when they host rival Southern Arkansas at 6 p.m. inside Carpenter-Haygood Stadium and Ruggles Field.