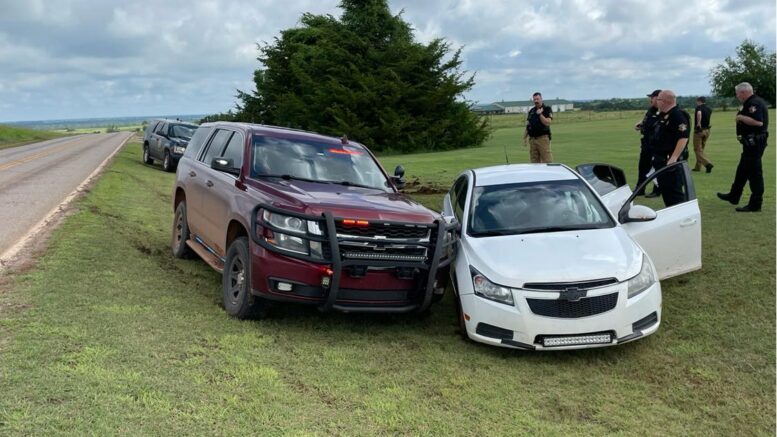 Updated on July 2, 2021 at 5 p.m. — The Logan County Sheriff’s Office confirmed the driver in the pursuit earlier today was Calvin Kyle Sears of Guthrie.

He was arrested for several infractions, including eludes or attempts to elude a police officer after receiving signal to stop in such a manner as to endanger any other person.

A man is in custody following a 19-minute pursuit with police. The event took place on Friday morning starting in Guthrie and ending near Cashion.

A Logan County deputy pulled over a white Chevrolet car near Fogarty Elementary for an obscured license plate at 10:35 a.m. As the deputy approached the car, the driver sped off.

Soon, police officers with the Guthrie Police Department joined in on the pursuit as the driver began traveling west on College Ave. The pursuit continued for several miles before reaching Highway 33.

The speeds of the pursuit were up and down throughout the chase, but reached as high as 115 mph.

A deputy attempted multiple pit maneuvers to stop the driver. However, the driver continued to swerve in and out of traffic nearly striking other vehicles.

The suspect turned onto Highway 74F (Cashion turn off), where the deputy was eventually able to spin the driver out.

The driver was quickly taken into custody at 10:54 a.m.

He told the deputies, “I’m an idiot.”

Logan County Sheriff Damon Devereaux says the driver was taken into custody without further incident. Devereaux said the driver had at least one warrant and is likely the reason he took off.

When he arrived at the intersection, children were promoting their firework stand.

Haga, by loud speaker, told the group to move from the corner and warned them about the incoming pursuit. Several seconds later, the pursuit drove through the intersection.

“Major shout out to Logan County Sheriff’s office and keeping our kids safe,” a person who was overlooking the fundraiser. “This is an example of a civil servant going out of his way to protect his community. He did not have to leave his home to warn us but he did! Thank you for your service!”

Parents were appreciative of Haga and afterwards took pictures with him.