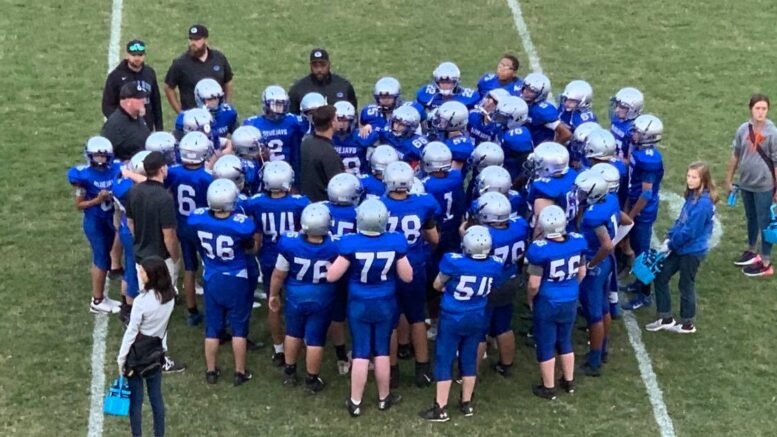 Despite taking only taking 9 offensive snaps and punting in two of their three first half possessions, the Guthrie Junior High School football team took down their conference opponent on Thursday evening.

The Guthrie seventh and eighth grades combined to play El Reno’s eighth and ninth grade teams in a 32 minute game inside Jelsma Stadium.

El Reno dominated the time of possession in the first half by a 13 to 3 minute margin, but it was the last few moments of the half delivered the game’s first score.

The Indians tossed an interception to Zane Thomas, who then returned the ball for 62 yards to set the Jays up on their opponents 30 yard line with 21 seconds left in the half.

Guthrie’s next score came in the fourth quarter when Cochran hit Thomas with a pass in the flat. From there, Thomas broke tackles to score from 25 yards out to finish a 9-ply drive and push the score to 13-0.

El Reno added their lone score with just under two minutes left in the game on a 7-yard touchdown pass.

The two squads from Guthrie will be back in action on Oct. 8 when they travel to Midwest City to take on Carl Albert. The seventh grade game is set to begin at 5:30 p.m.