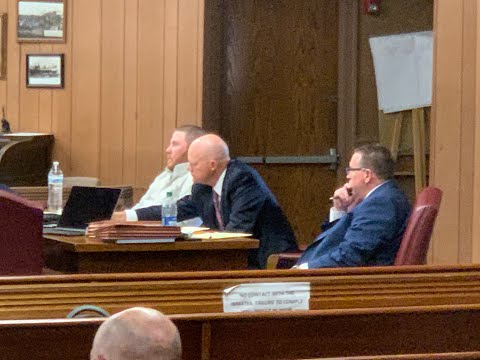 Jurors needed just over five hours Monday to reach a not guilty verdict following a four-day trial in the case involving Zach Simmons.

33-year-old Mandy Gorsuch died Oct. 26, 2019, after being struck by Simmons’ F-250 just outside a Guthrie downtown bar. Simmons was charged with leaving the scene of a fatality accident.

After the verdict was read, Simmons was seen with his hands in his face and tears in his eyes. He hugged his attorneys and then his family, including wife Mallory Simmons, who was the passenger in the truck the night of the incident. Mallory was the only person involved in either party not to be called to the witness stand.

If found guilty, Simmons faced up to 10 years in prison. Instead, his bond was exonerated by the judge following the verdict.

The district attorney’s office had to convince jurors of six elements: defendant drove a vehicle, defendant was involved in an accident, the incident resulted in the death of a person, that the act was willfully or maliciously and that he failed to stop.

“I think the jurors saw the truth in the case,” Simmons attorney Scott Adams said after the trial. “Zach had no idea that he was involved in an accident.”

“Zach had no knowledge that he had ran over anyone,” Adams said.

The lone witness the district attorney’s office called to the stand Monday was a medical examiner, who said Gorsuch died due blunt force trauma to the torso.

Adams did not call any witnesses and rest moments after the state rested, including Mallory Simmons.

“It’s not my burden. If they (district attorney’s office) wanted her they could have subpoenaed her and had her here. They did not and I chose not to call her. At the time we had rested, I was at the opinion we were ahead and there was no reason to try and rock the boat at that point and time.”

The district attorney’s office did not speak to the media following the verdict.