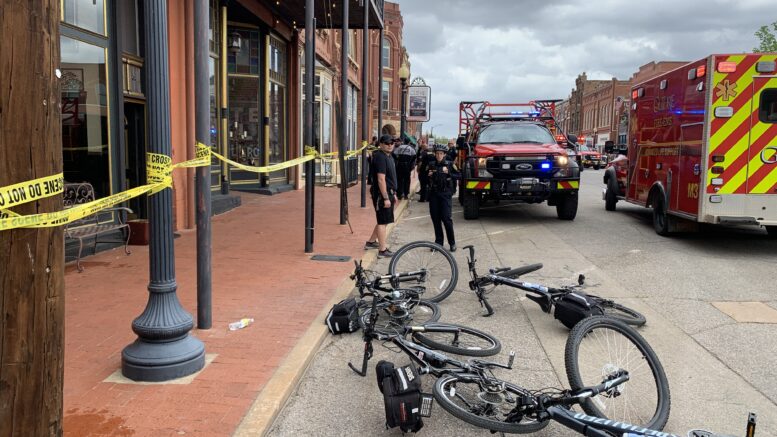 Updated on April 25, 2022 — The two juveniles were in court Monday aftenroon behind closed doors for their formal arraignment. Each were given a $500,000 bond and were transported to separate juvenile detention centers.

Police tell GNP two juvenile males had broken into a residence located on Harrison Ave. between 1st and 2nd Streets. While stealing items from the first floor, a young adult male was upstairs playing a gaming system with headphones on and did not hear any of the noise from below.

The suspects evetnually made their way to the second floor and began to assault the young adult, which led to him being stabbed multiple times in the back.

About this time, the mom and dad made their way into the home and found the upstairs door to be locked and barricaded from within. The father was able to gain access by kicking in the door.

Once inside, the father and one of the suspects began to get into an altercation. The mother ran to a bedroom and was followed by the other suspect. Inside the bedroom, the mom was stabbed multiple times. However, she was able to call 911.

The father and one of the suspects met in an alley way that eventually made its way onto 1st Street in the middle of the 89er vendor booths and crowd.

At this time surveillance video shows the father continuing to spray the suspect, but also accidentally spraying those in the crowd, including a small child who took a direct hit.

The crowd grew angry at the dad with the spray despite repeating to them all “he stabbed my wife.”

Next, the video shows four officers coming into the scene and taking the suspect into custody.

The second suspect was taken into custody a short time later.

The mother and son were transported to OU Medical Center for multiple wounds. The young male is believed to have been stabbed four times and the mother seven times. The father also suffered stab wounds but was able to stay at the scene to work with police officials.

The mother and son remain in stable condition.

Guthrie Police are investigating a stabbing that sent two people two people to the hospital and another in custody. All of this took place moments after the annual 89er Parade.

The stabbing allegedly took place inside a downtwon residence on Harrison Ave. between 1st and 2nd Street. The scene remains taped off with police tape as of 4 p.m.

The victims were said to be in stable condition and transported to the trauma center at OU Medical Center. A third victim was reported to have minor wounds.

One person is in custody.

Police have not released any further details at this time.

Original video at the scene can be seen below this article.