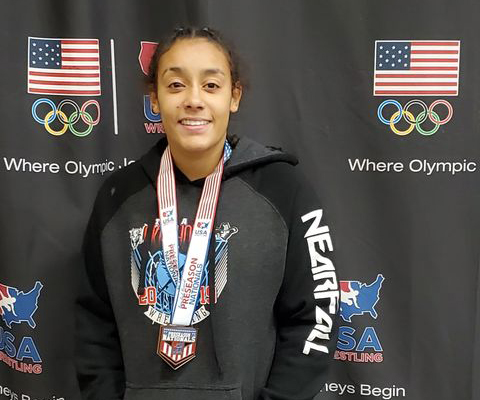 Khaleah Isabela Kirk, a sophomore at Guthrie High School, represented Oklahoma and her school at the Brian Keck Pre-Season Nationals in Des Moines, Iowa over the weekend.

For this tournament, she was coached by her club coaches from Standfast Wrestling Coach Josh Powell and Coach Chad Ryan Whitney. She participated in the 122 pound division for the girls high school wrestling division.

Khaleah battled some fierce competition with highly ranked girls from all over the nation and doing so in only her second year competing in the sport.

As a former national placing completive gymnast, she is no stranger to high level competitions. Her eyes were on the prize to rank nationally and she achieved this by placing 8th in her bracket and becoming an All-American.

Eli had a good run with five matches at 113 pounds. Although he did not place, he had an amazing time competing with the best in the United States.

Klaribel Kirk wrestled at 106 pounds and was two and out.