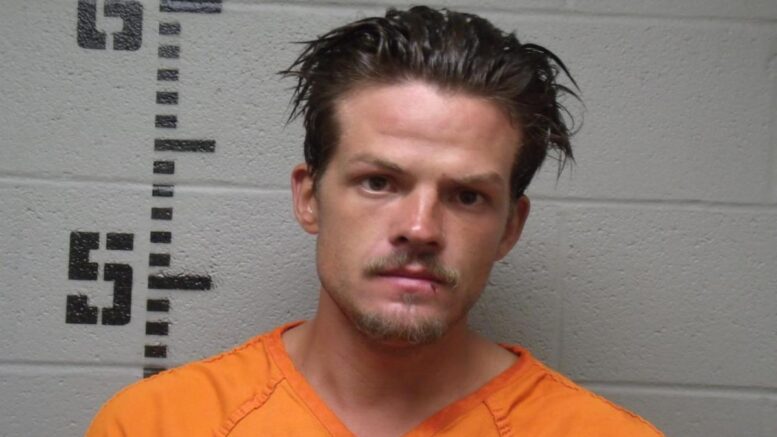 Motorists began making calls around the Oklahoma and Kansas state line early Monday morning. What they saw was a man holding on to the back of the semi-trucks door.

The driver of the truck left a Wichita shipping yard and began driving southbound on Interstate 35. Little did the driver know there was extra cargo on holding in the back.

With much surprise from motorists watching the event take place, the Oklahoma Highway Patrol was notified and contacted the Logan County Sheriff’s Office of the situation just before 2:30 a.m.

As Logan County deputies began receiving calls of the truck around mile marker 178 (near the Cimarron River bridge), the truck driver finally came to a stop after another semi-truck and a vehicle constantly flashed their headlights seven miles outside of Guthrie.

The Kansas man on the back, 30-year-old Dustin Michael Slocum, was found standing on the rear rails of the trailer hanging onto the door bar.

The distance from Wichita to Guthrie is nearly 130 miles.

Slocum told deputies he had hopped on in hopes of finding his wife (in Kansas). He said he tried to get the driver to stop but that he didn’t.

To much surprise, the driver of the truck was taken aback as to what had just happened.

Slocum was taken into custody and booked into the county jail just after 4 a.m.

On Monday, Slocum was formally charged with being intoxicated in public and joyriding. Both charges are listed as misdemeanor crimes. Slocum pleaded not guilty to both and was given a $2,000 bond.

Be the first to comment on "Man rides on back of semi-truck from Wichita to Logan County; arrested, charged"