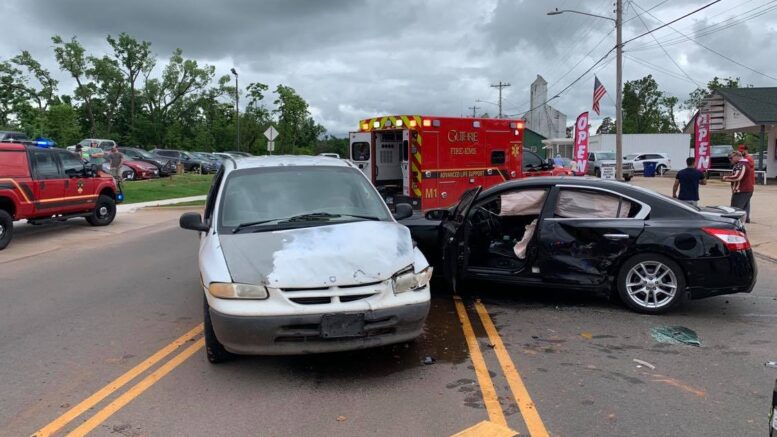 A two vehicle crash on S. Division St. could have ended much worse after a driver appeared to have suffered a medical episode.

Guthrie police and fire responded to the 800 block of S. Division St. around 3:30 p.m. on Thursday for a report of a crash with one of the vehicles on fire.

According to several witnesses, a black four-door Maxima was leaving a business when they struck a white minivan who was traveling northbound on Division St. The impact caused the Maxima to turn and into the driver’s side of the white van.

The driver of the Maxima was unconscious with the accelerator pedal to the floor causing the tires to spin and giving off a lot of smoke. Luckily, the Maxima was unable to move as it was pinned against the minivan. If not, the car would have traveled into the direction of people, a business building and parked vehicles.

A bystander attempted to get into the vehicle by throwing a bucket filled with concrete into the car window but with no luck. Police, however, were able to get inside and disable the vehicle.

Along with the heavy smoke, one of the Maxima’s tires burned through the asphalt on the roadway.

Police believe the driver suffered a medical episode and was not aware of what had happened. She was transported by Guthrie EMS to OU Medical Center.

No other injuries were reported at the scene.

Traffic was rerouted around the crash as both vehicles were towed from the scene.

Be the first to comment on "Minivan prevents car from driving into people, business in vehicle crash"