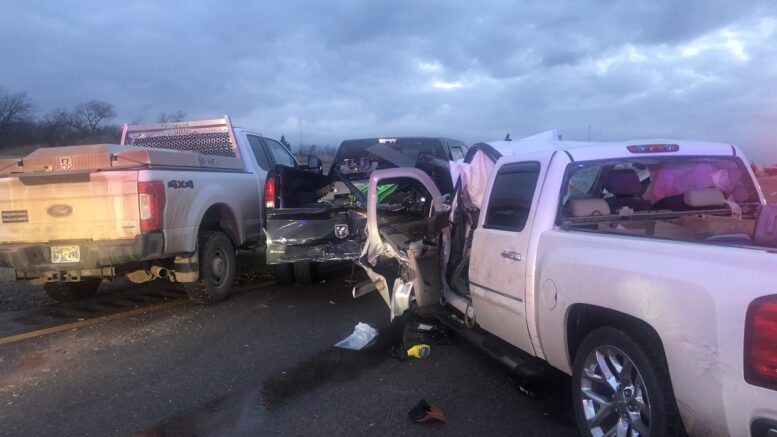 8:36 — GNP will pass along more details, including OHP’s traffic report, as soon as they become available.

8:39 — One more patient has been taken to the hospital by ambulance. Four patients have now gone by ground and two by air.

8:09 — GNP has confirmed three people taking to the hospital by ambulance and two by helicopter.

The highway (northbound at Highway 33) will be closed down for an extended amount of time.

7:52 — Northbound traffic is being diverted off the highway at mile marker 157 and on to either Highway 33 east or west bound.

7:50 — Accident involves with two, maybe, five vehicles. A semi-truck was also possibly involved but did not stay at the scene.

The first ambulance has left the scene with three patients.

7:38 – Second helicopter has lifted from the scene.

7:20 — The first of two medical helicopters has landed on the highway.

I-35 Accident (6:51 am) — Multi-vehicle accident on I-35 northbound, just north of Highway 33 has the highway completely blocked.

Multiple injuries, including at least one critical, being reported. Two medical helicopters and three ambulances is being requested.

Traffic is going to be stopped on the highway at mile marker 157.