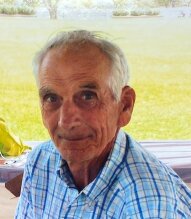 Chester began his life story on September 23, 1939, the firstborn twin, arriving with his brother Lester, in Britton, Oklahoma.  They were born to Thomas Richard Cutter, Jr and Wanda Lucille Beard Cutter. A few years later, the family moved to the Cutter family farm in Crescent, Oklahoma.

During this chapter, he and his twin Lester engaged in many escapades that became entertaining stories and precious memories.  Their shared life developed a lifelong bond that was not weakened by the different paths their lives followed. Growing up on the farm with his twin Lester and siblings, Richard Dean; Velma Lou and Ruby Pearl, was a precious time that he loved to reminisce. His family shared a love of music and they often played together.  Aunt Fanny played old fashioned piano, he played guitar, his twin Lester played the mandolin, and their sister Ruby played the ukulele.   He also loved to reminisce about flying in their dad’s 1939 Piper Cub J-3 Trainer Dual Control Airplane.  His Dad took many of the kids of Crescent flying in the plane.  In High School, Chester and Lester enjoyed playing football and participating in FFA. He was proud of the grand champion hog they raised. After High School, Chester and Lester attended college together, shared cars and proudly served in the Air National Guard.

Chester was a quiet, gentle and kind man, with a wonderful sense of humor.  He enjoyed many activities, bowling, riding motorcycles, swimming and boating.  When he was a young man, he taught many people how to water-ski.  He loved flying in airplanes so much that he took flying lessons and worked towards earning his pilot’s license.  It was during this time that he met Kathy, through a mutual friend named Nancy.  He taught her how to water-ski and they enjoyed many adventures. They made their home in Oklahoma City and had 3 children.  Although he didn’t finish getting his pilot’s license, he did fly his wife Kathy and his small children from Oklahoma to Colorado in a small airplane co-piloted by a licensed pilot when the kids were very young.

He loved his family more than anything.  In his younger days he drove the kids back and forth from Colorado to Oklahoma many times.  He cherished and adored his kids, grandchildren and great grandchildren.  He loved to take them all over the place.  He happily drove them to The Great Sand Dunes, the swimming pool, to get a snow cone, the pumpkin patch and the playground. He taught his kids and grandchildren how to ride bicycles, drive cars and swim. Throughout the years, he enjoyed many road trips, camping trips, and adventures with all his children, grandchildren and great-grandchildren.

For his working career, he filled many roles.  He leased and operated a Kerr-McGee gas station in Oklahoma City.   Later he leased and operated a gas station in Alamosa, CO. He worked as a small engine mechanic at Frontier City, OK; various jobs on farms and for his final career, he was a truck driver. He truly enjoyed truck driving and seeing many different places all over the USA. He would have continued truck driving but was forced to retire for health reasons.

In his later years Chester suffered a stroke which caused him to walk with a limp.  His right side was impaired, but that didn’t stop him from living his life or riding bicycles. He still enjoyed fishing with his late friend Jim Larriva at Mountain Home Reservoir, going for bike rides with his lifelong friend Robert Tontz in Oklahoma and his friend Shirley in Colorado. He enjoyed watching college football, playing with CB radios, walkie talkies, barbeques, birthday parties and family dinners.

He loved to help people. He was always the first to offer help to his family, friends and neighbors.  If they needed a jump start or a new battery, money, to borrow his car or truck; a ride across town; across the state or across the country.   He was always eager to help everyone.  Aside from his kids, his other greatest accomplishment was when he stopped drinking, celebrating more than 30 years of sobriety.  He spent many years actively participating in AA meetings and functions and continued his helping nature always looking for ways to help others achieve sobriety.

In his final years he developed dementia and then suffered from cancer, yet he never lost his desire to help his friends, family and neighbors.   He also retained his sense of humor and enjoyed making people laugh.  He peacefully closed the final chapter of his life on May 3, 2022, surrounded by his loving family.

Cremation was selected and a memorial service will be held at 10:00 am on Wednesday May 18, 2022 at the Rogers Family Mortuary in Alamosa.  Interment will take place on Saturday May 21, 2022 at 10:00 am at the Crescent Cemetery in Crescent, Oklahoma.  To express condolences, please visit www.rogersfunerals.com

Rogers Family Mortuary in Alamosa is in care of the arrangements.

Be the first to comment on "Obitaury: Chester Clifton Cutter"