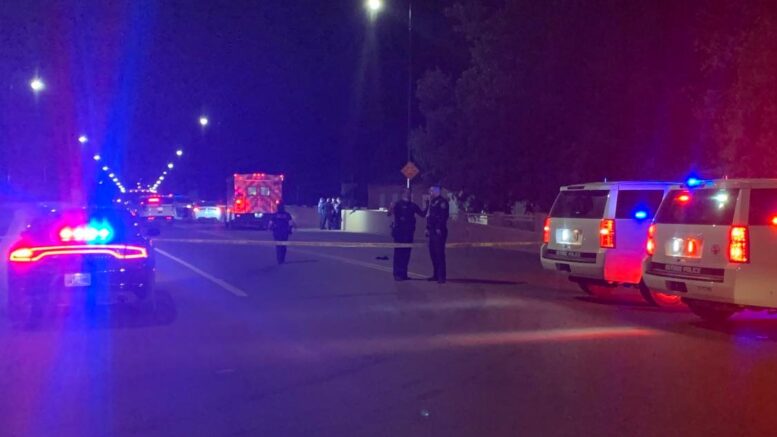 Updated on Nov. 8 at 2 p.m. — The person of interest, identified as a 16-year-old by police, is no longer being detained at this time, according to the victim’s family. Sgt. Anthony Gibbs confirmed the teenager was detained, questioned and allowed to leave after being speaking with police.

A search warrant was obtained and granted early Monday morning. The person of interest was placed into investigative detention for questioning.

Investigators collected evidence during the warrant, which has been sent off for analysis.

Investigators with the Guthrie Police Department and OSBI continue to work the case.

Updated on Nov. 8 at 7:30 a.m. — A 16-year-old male was taken into custody at his residence just after 2 a.m. on Monday by the Special Response Team (SRT) following a search warrant.

The shooting took place approximately in the 1300 block of E. Grant Ave.

No arrests have been made in the case.

Update at 2:45 a.m. — With the use of the Special Response Team (SRT), the person of interest in the murder of a 14-year-old is now in police custody. No arrests have been made in the case.

Update at 12 a.m. — The 14-year-old victim’s name has not publicly been released at this time. However, several family members and friends had been at the scene for several hours.

The victim was a former student-athlete in the Coyle school district.

Chief of Police Don Sweger tells Guthrie News Page that the suspect is not in custody at this time, but that they are following several leads in the case to identify and arrest the suspect.

Guthrie News Page has learned the shooting took place on the east side of town. Investigators are surveying the scene. GNP is currently not releasing that location, but will as soon as it can be known publicly.

The victim was taken from the scene by a teen in a white four-door vehicle in hopes of reaching the local hospital, but stopped on the bridge and requested an ambulance.

The roadway was opened in both directions at 11 p.m.

The person was being transported to the hospital in a vehicle when they stopped on the viaduct and requested an ambulance.

Right now there is no suspect information.

The Oklahoma State Bureau of Investigations (OSBI) is en route to the scene to assist with the case.

The Guthrie Police Department is on the scene of a homicide on Guthrie’s west side.

Guthrie News Page has confirmed one person has died due to an apparent shooting.

There are not many details at the current time, but the viaduct is currently blocked off in both directions.

The incident was reported just after 5 p.m.

Guthrie News Page will have more as it becomes available.

Be the first to comment on "Person shot, killed; found on west side of town"