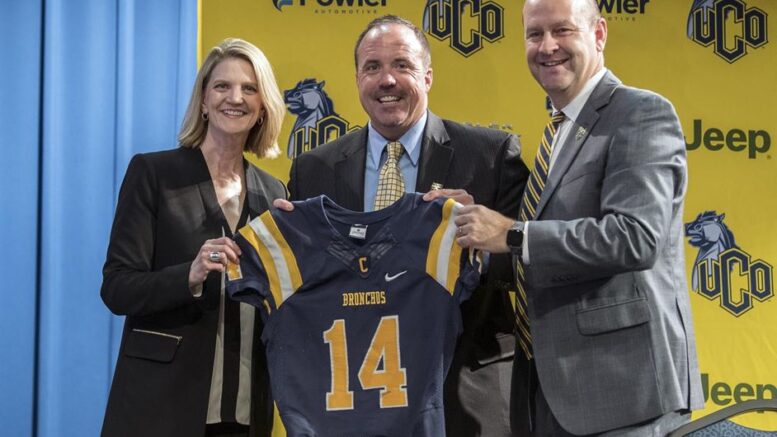 EDMOND – Adam Dorrel was introduced Wednesday as the 14th head football coach at the University of Central Oklahoma.

Dorrel, a native of Maryville, Missouri who played and coach at Northwest Missouri State, comes to Central after spending the last five years at Abilene Christian.

Watch the video by clicking the link: https://themiaanetwork.com/ucobronchos/?B=332671

“I’m very excited to be at UCO for a lot of reasons,” Dorrel said. “No. 1 is it is a great academic university. It has a great athletic tradition in a lot of sports. And if you look at the location of where we’re at, that’s something that is very positive. Awesome facilities too, to get student-athletes here and keep them here.”

“The future of our football program looks better than ever thanks to you joining us here,” UCO President Patti Neuhold-Ravikumar said. “We’re proud to welcome him as a new member of the Broncho community and to elevate our tradition of team and student success.”

Dorrel played football at Northwest Missouri in the mid 1990s and became a graduate assistant coach there in 1999, when the team won its second national championship. After a few seasons working as an offensive line coach and offensive coordinator at other schools, Dorrel returned to Maryville to do the same for the Bearcats.

From 2004-2010, Northwest went to five consecutive national title games and won the third championship for the school in 2009.

Then he became head coach at his alma mater and the success ballooned higher.

Dorrel then went to Abilene Christian to help the school as it transitioned into Division I. He went 19-32 there, leading ACU to its first winning season since making the move to DI in 2018. He coached over a dozen All-Conference selections in five seasons in Texas.

Dorrel now inherits a Central program with 644 all-time wins, the fourth-most in Division II history. The Bronchos are coming off a 4-7 season in 2021.

The 2022 season is scheduled to start in September.