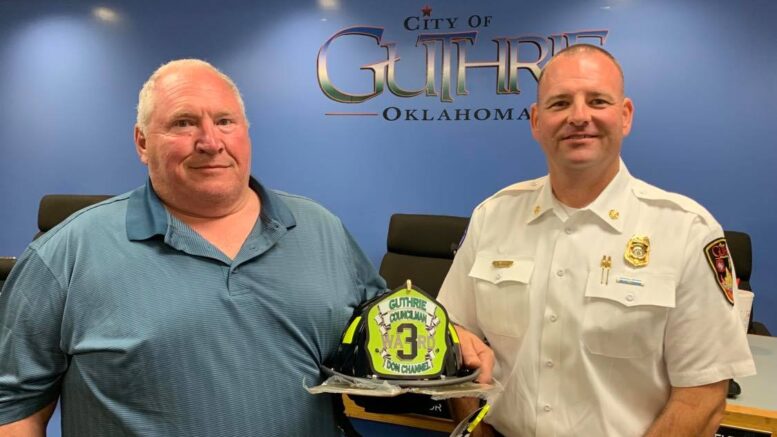 Close to 400 firefighters, both active and retired, made their way to Guthrie for the 127th annual Oklahoma State Firefighters Association Convention in June. Related article: Gov. Stitt visits Guthrie for OSFA Convention

Harlow thanked the council for their support, including Mayor Steve Gentling and Vice Mayor Jim Case who spoke at the convention on behalf of the City.

The chief presented each councilman a challenge coin that commemorated the convention.

In addition, Harlow presented Councilman Don Channel with a custom design firefighter’s helmet. Channel donated his time to smoke several pounds of meats for the fighters and their families at the outdoor picnic held at Mineral Wells Park.

“I appreciate the City’s support,” Harlow told the council. “The City, as a whole, was a huge help throughout that event and we gratefully appreciate the opportunity. We’ve had great reviews.”

Be the first to comment on "Video: Fire Chief thanks council members for successful OSFA Convention"